The Young and the Restless Spoilers: Faith Rebels After Nick’s Betrayal To Sharon – Gets Wilder, Develops Major Alcohol Problem? 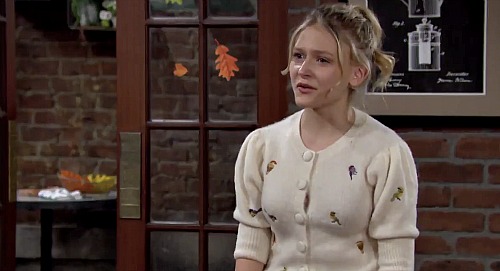 The Young and the Restless spoilers tease that Faith Newman’s (Alyvia Alyn Lind) life is about to get way more stressful. As Y&R viewers know, Nick Newman (Joshua Morrow) recently found out about Faith’s foray into drinking.

Faith has now drunk on two occasions, and of course Nick was none too happy about it. Faith got an earful from Nick about the perils of drinking, but it didn’t seem like it really sank in.

In actuality, it seemed like Faith was more interested in keeping Nick from telling Sharon Newman (Sharon Case) about her drinking than she was about owning up to what she did.

Faith even played the cancer card and asked Nick not to tell Sharon about her drinking escapades on the grounds that her mom had been so happy lately after beating cancer. It seemed a bit manipulative, and inexplicably, Nick said that he’d think about it.

Well, Y&R spoilers indicate that Nick will indeed tell Sharon about Faith’s drinking, and that Faith will come along shortly thereafter and hear her parents discussing the situation.

The Young and the Restless spoilers say Faith will feel betrayed by Nick and she’ll be upset that he spilled to Sharon.

In fact, Nick might even spill how Faith was spotted in Chancellor Park at night with Jordan (Madison Thompson) on a pervious occasion, and that should pretty well seal Faith’s fate for a while.

One would expect that Nick and Sharon are going to come down hard on Faith for her drinking, but something tells us that Faith isn’t going to just stop using alcohol.

It’s been pointed out more than once on the show recently that Faith’s grandmother Nikki Newman (Melody Thomas Scott) is an alcoholic. Might Faith be on an early road to alcoholism herself?

Although Faith’s friend Jordan got her into drinking alcohol, there seems to be a very real element of coping to Faith’s drinking.

Let’s face it, Faith has been through a lot in the recent past, with her mother battling cancer and the Adam Newman (Mark Grossman) exposé coming out and causing her to be bullied by the other kids. Faith may have started drinking due to peer pressure, but she could be finding a real escape in the bottle.

And if that’s the case, then with the added complication of her parents knowing about the drinking and coming down hard on her, that could lead Faith to want to drink all the more!

Maybe Faith will get even wilder and more frequent in her alcohol use. Jordan seems to be willing to help Faith circumvent her parents at every turn, so something tells us that Faith’s drinking probably isn’t behind her.

It will be interesting to see what happens here, but if Faith does indeed carry the predisposition for alcoholism, then all of this drinking behind Sharon and Nick’s back could be very dangerous.

Do you think that Faith could be at risk for becoming addicted to alcohol? Stay tuned to the CBS soap and be sure to keep CDL at the ready for all your Young and the Restless spoilers, updates, and news. We’ve got you covered!