The Young and the Restless Spoilers: Faith Struggles, Heads Down Treacherous Path – Bad Outcome Ahead 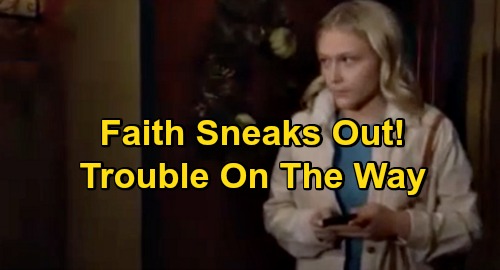 The Young and the Restless spoilers tease that Faith Newman (Alyvia Alyn Lind) seems to be having a really hard time lately. As Y&R viewers know, the news about Sharon Newman’s (Sharon Case) cancer hit Faith hard, yet in the beginning, Faith was pretty optimistic and hopeful about her mom’s prognosis.

But then, when Faith saw Sharon struggling with chemotherapy and after Sharon got a discouraging report after her first surgery, Faith really struggled.

Well, Faith’s struggle seems to be continuing, and she seems to be having a really difficult time expressing what she’s feeling.

Sharon, Nick Newman (Joshua Morrow), and Mariah Copeland (Camryn Grimes) have reached out to Faith to talk about things, but Faith has consistently said that she’s “fine” and she seems to parrot back all of the encouraging sentiments that everyone else says, always saying the right thing.

Faith seems to be more interested in letting everyone know that she’s ok than actually discussing how she is.

We have to remember that Faith isn’t a little adult. Faith is certainly growing up, but she’s still a young girl who’s having real difficulty handling one of her parents having a life-threatening illness.

All of the stress that Faith is feeling and bottling up inside is going to have to go somewhere, and one wonders if we’ll see Faith have some serious difficulties going forward.

Of course, it doesn’t help that Faith has had to deal with the other kids bullying her and making her life difficult over the exposé that came out about Adam Newman (Mark Grossman). Faith didn’t need that at all, especially at the same time that she’s dealing with the stress of her mother having cancer.

Perhaps Faith could benefit from therapy – she really needs someone to open up to and she needs a chance to express herself with someone who isn’t so desperately interested in hearing that she’s “ok.”

Recently, Faith got a mysterious text from someone, and Y&R spoilers say that she’ll again get a text from this person and sneak out of the house. Could Faith be acting out and perhaps getting into some trouble?

It would be a natural, although worrisome, reaction if Faith got in with the wrong crowd or started doing things like drinking or using drugs that would provide a quick escape from her problems.

Faith seems like she’s internalizing her problems, and that seems like a major risk factor for drinking or acting out in other ways.

It will be interesting to see what happens with Faith after she finds out that Sharon’s second surgery was a success, and that Sharon is on her way to being cancer-free.

Of course, Faith will be thrilled, but The Young and the Restless spoilers reveal that her stress isn’t going to just go away. Faith could still suffer from the fear and terror that she experienced over thinking that she could lose her mom. Faith might need professional help to get past all of this.

We’ll see what happens here, but there could be a very interesting story here for Faith if TPTB want to take her in that direction. Y&R spoilers tell us we’ll see Faith continue to struggle, even after she’s heard Sharon’s good news.

Stay tuned to the CBS soap and don’t forget to check CDL often for the latest Young and the Restless spoilers, updates, and news.