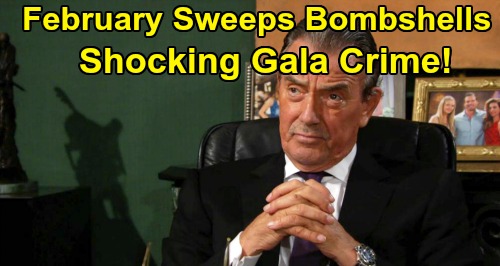 The Young and the Restless (Y&R) spoilers tease that a special event is coming up. It turns out this event will celebrate a big accomplishment both onscreen and off! Y&R fans know Nikki Newman (Melody Thomas Scott) has been excited about Newman Enterprises’ 50th anniversary gala. However, she pointed out that she really wanted it to be a celebration of Victor Newman (Eric Braeden).

There’s a good reason for that since this party coincides with Braeden’s 40th anniversary on the show. Braeden is why we’re celebrating, but Y&R’s going to play it up right and actually turn it into a story.

That brings us to this intriguing gala, which will lead to some huge shockers and shakeups. We’ve got a preview of the fun shindig, which will be the centerpiece of February sweeps.

For starters, The Young and the Restless spoilers say some huge returns are looming. Noah Newman (Robert Adamson) will be back in time for this event, but other faces of the past should be in the mix.

Y&R may end up diving deep into the show’s history since they’re celebrating Braeden’s fantastic four decades there. You just never know who might pop up!

The Young and the Restless should also deliver some flashbacks along the way. They’ll definitely go all out to make Braeden feel loved and appreciated. Nevertheless, this gala will be so much more than just a way to honor Victor and his portrayer.

As we mentioned, it’ll lead to some major February sweeps bombshells. It’ll be a party to remember thanks to the drama that unfolds.

Victor’s loved ones will be at this gala, but enemies will be lurking in the shadows. That may include enemies of guests as well! The point is dark forces will be at work, which will set up total chaos.

We know Paul Williams (Doug Davidson) will have some scenes as part of this multi-episode event. We also know Paul’s set to investigate a shocking crime this February, so it sounds like it may go down at this very party. Could that mean murder and mayhem? Is another hostage crisis brewing instead?