The Young and the Restless Spoilers: Friday, February 28 Review – Abby Turns The Tables On Phyllis – Victor Weighs Adam For CEO 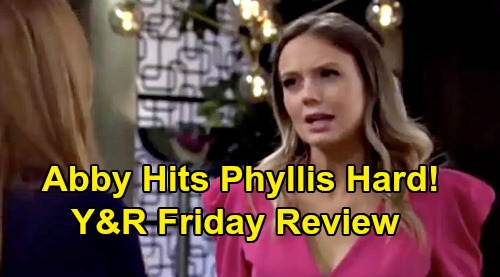 The Young and the Restless spoilers review for Friday, February 28, tease that Victoria Newman (Amelia Heinle) will awaken in her hospital room to find Victor Newman (Eric Braeden), Nick Newman (Joshua Morrow), and Nikki Newman (Melody Thomas Scott) with her. She’ll be a bit disoriented, and Nick and Nikki will leave her alone with Victor.

Later, in the waiting area, Victor will tell Nick that they need to talk, and he’ll proceed to tell Nick and Nikki that he needs to make a decision about Newman Enterprises. He’ll say that his health won’t allow him to continue serving as CEO, and Nick will quickly realize that he’s considering Adam Newman (Mark Grossman) as an option.

Nick will be agitated, saying that it can’t be Adam, and that Adam will surely refuse to step down, even when Victoria gets better. Victor will say that it’s his call to make, and Nick will explode, saying that Adam tried to kill him, and that he tried to destroy the family multiple times. Nick will leave angry, but Victor will think that he’ll come around in time.

Next, over at Society, Adam will find Jack Abbott (Peter Bergman) at Society, fresh off the phone from updating Ashley Abbott (Eileen Davidson) on Dina Mergeron’s (Marla Adams) declining condition. Adam will be sorry to hear that Dina isn’t doing well, and talk will quickly turn to Adam’s relationship with Victor. Jack will catch on that Adam feels he wants to prove himself to his father.

Jack will note that he assumes that Adam wants to return to the family fold, but Adam won’t be so sure that Victor will allow it. Adam will insist that this isn’t about making a power play, and Jack will offer his support conditionally. He’ll say that if he steps in at Newman Enterprises, he’ll need to step down with grace when Victoria is better, or else he’ll hurt his relationship with his family for good.

Jack then advised Adam to let Victor make the next move. We’ll see if Adam can restrain himself, both from making the next move and from competing with Victoria for the CEO spot once she’s better. This situation will probably be a big test for Adam, as his competitive nature will almost certainly kick in once he’s back in the fold.

Meanwhile, on the new episode of Y&R on Friday, February 28, Abby Newman (Melissa Ordway) will face down Phyllis Summers (Michelle Stafford) at the Grand Phoenix. She’ll be adamant with Phyllis that she’s not going to hand over the hotel, even when Phyllis insists that she can make the lawsuits against the hotel go away.

Later, Amanda Sinclair (Mishael Morgan) will overhear Abby fire her lawyer over the phone, and she’ll speak with Abby about the conflict between her and Phyllis. She’ll advise Abby that she should think about her long-range plans, and Abby will admit that she is looking beyond Society and the Grand Phoenix. She’ll complain that she doesn’t want to let Phyllis beat her because of how it would look.

And to that, Amanda will say that people will think what they want to think, but Abby needs to decide what a “win” looks like to her. Abby will go, and Amanda will talk with Phyllis and hear her side of the story. Phyllis will go on about how the hotel meant something to her, and that Adam, Abby, and Chelsea Lawson (Melissa Claire Egan) took it all away from her. She’ll explain that it’s personal, and that the Grand Phoenix is her baby.

Soon, Abby will come along and overhear Phyllis say that she will keep causing chaos until Abby forks over the hotel. Phyllis will expect a fight, but Abby will bring drinks for the three of them and announce that she’s selling Phyllis all of her shares. She’ll whip out a letter of intent to sell, making Phyllis thrilled.

Abby will then divulge that she just purchased the property across the street, and that she has plans to build a bigger, better, grander hotel. Phyllis will be horrified as Abby apologizes in advance for all the construction noise to come. Phyllis will be flustered, and she’ll insist that she won, and that Abby should “bring it.” Abby will reply that “it’s been brought.”

So it seems that the competition between Phyllis and Abby will continue, just in a very different way. They’ll now get to go head to head in business, rather than antagonizing each other within the same business venture. And we’d have to say that this will likely put Phyllis at a disadvantage, although with Phyllis she could have another trick or two up her sleeve.

It seems that we’re in for a great episode of Y&R on Friday, so stay tuned! We’ll give you updates as Y&R news comes in. Stick with the CBS soap and don’t forget to check back with CDL for the latest Young and the Restless spoilers, updates, and news.