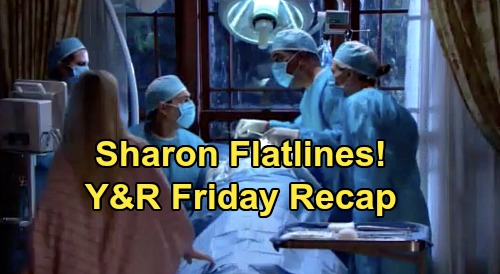 The Young and the Restless (Y&R) spoilers recap for Friday, February 7, teases that Sharon Newman (Sharon Case) will battle concerns before her chemotherapy begins. At home, Sharon will talk about the meals she’s prepped ahead of time. Rey Rosales (Jordi Vilasuso) will be on hand to embrace Sharon and support her.

Sharon will point out that she’s been getting support from her online group, too. After Rey pushes Sharon to open up to him, she’ll eventually admit her fears. Sharon will still feel like this is some sort of mistake – like the kind of thing that happens to someone else, not her.

Although Sharon will be thankful for early detection, she’ll still be having a rough time. If Sharon could go back, she wouldn’t take so many things for granted. Sharon will want to maintain her independence, but Rey will insist on staying and sleeping on the sofa.

Once Sharon’s tucked in bed, she’ll have trouble falling asleep. Suddenly, Sharon will look up and assume Mariah Copeland (Camryn Grimes) is standing by her bed.

She’ll be taken aback to learn it’s Cassie Newman’s (Camryn Grimes) spirit instead. Cassie will extend her hand to Sharon and urge her to come with her, but Sharon will insist she isn’t ready. She’ll push Cassie to leave, so the vision will vanish.

However, Sharon’s strange dreams will continue as she runs downstairs to see that Rey’s gone. She’ll rush over to the door and face the wind whizzing. Sharon will find herself at Crimson Lights for the next part of her nightmare. She’ll learn Rey’s moved back to Miami and express confusion. Phyllis Summers (Michelle Stafford) will contend that Rey loved the old Sharon, but “not this.”

Sharon will point out that she still has Mariah, but The Young and the Restless spoilers say she’ll get some bad news. Mariah will admit Tessa Porter (Cait Fairbanks) missed her so much that she begged her to come on tour. Since Sharon pushed her away, Mariah will insist she’s leaving.

Afterward, a dream version of Nick Newman (Joshua Morrow) will appear in a tuxedo. He’ll think Phyllis looks incredible – and Phyllis will suggest she’s been counting the seconds down to their hot date. Sharon will wake up in a panic over going through this alone, but Cassie will appear again and promise she won’t be.

Downstairs, Mariah will joke with Rey about having pepper spray and knowing how to use it. Rey will point out that he taught Mariah how. He’ll explain why he’s an unexpected guest this evening and note that Sharon’s asleep. Mariah will hope her mom’s having sweet dreams, but Sharon will have more nightmares instead.

In the next one, Sharon will head downstairs again and see doctors performing surgery in the living room. Mariah will state that this is the day Sharon’s life changed forever. She’ll get back to her talk show hosting roots by interviewing Nick, Phyllis and Rey on the sofa.

Sharon will hear them talk about the changes they saw in her after the surgery. Nick will contend that Sharon’s treatment was hardest on her kids. It’s tough when they have memories of who their mother used to be; they don’t talk about Sharon much anymore.

Phyllis will struggle to understand why Sharon made her family go through that just to buy herself a bit more time. As the interview ends, Y&R spoilers say Sharon will realize she – meaning herself on this operating table – is flatlining. She’ll start shouting about how she should fight and needs another chance to do things differently.

At the Grand Phoenix, Sharon will appear and Phyllis will show up soon after. Once Sharon insists she doesn’t need radiation therapy, Rey will offer pills and Mariah will present her with a cane. Sharon won’t understand, but she’ll ultimately see her reflection in a mirror. She’ll look weak and will be wearing a scarf on her head.

After Faith Newman (Alyvia Alyn Lind) cries, Cassie will pop up again. She’ll tell Sharon that it’s time to go home. Moments later, Sharon will awaken in her bed – for real this time! As she comes downstairs, Sharon will hear Rey and Mariah’s conversation. They’ll just wish Sharon would stop shutting them out.

Sharon will join them on the couch and explain that Cassie came to her in a dream. She’ll suggest that Cassie wanted to take her home, so Rey and Mariah will wonder what home exactly. Sharon will reply, “This one.” She’ll insist her home’s right there with them; Sharon will let them know what she needs from now on.

After Nick and Faith arrive, the table will be set for dinner. Sharon will feel like the luckiest woman in the world with all her loved ones around her. Finally, Sharon will fall asleep peacefully in between Faith and Mariah. The Young and the Restless spoilers say Cassie will reappear and gaze at her family.

It sounds like an intriguing episode’s in store. We’ll give you updates as other Y&R details emerge. Stay tuned to the CBS soap and don’t forget to check CDL often for the latest Young and the Restless spoilers, updates and news.