The Young and the Restless Spoilers: Friday, January 24 – Summer and Kyle Cheat on Lola – Amanda Shuts Billy Down, For Now 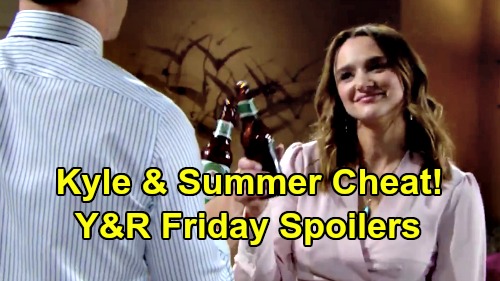 The Young and the Restless (Y&R) spoilers for Friday, January 24, tease that some bombshells are brewing. We should note that impeachment trial coverage will affect the CBS soap’s schedule in the coming weeks. Keep in mind that airdates may change, but you can expect to see all this drama play out eventually.

For starters, Summer Newman (Hunter King) and Kyle Abbott (Michael Mealor) will score a big win. On their business trip, we’ll see some successful “Skyle” teamwork. After Summer helps Kyle lock in a major cosmetic deal, they’ll head back to a hotel suite and savor their victory.

Kyle and Summer will grab a couple drinks from the mini bar before they settle in. Of course, they won’t need alcohol to feel relaxed around each other. Things were tense between them for quite some time, but they ultimately found their way back to friendship. However, The Young and the Restless spoilers say that line’s about to be crossed!

Kyle will encourage Summer to open up about Theo Vanderway (Tyler Johnson). He’ll wonder if their split’s going to stick, so Summer will admit she’s done with Theo. Summer’s moving on to bigger and better things. She’ll decide to ask Kyle about his marriage to Lola Abbott (Sasha Calle), which has gotten a bit rocky lately. Summer will wonder if Kyle’s happy – because that’s all she’s ever wanted him to be…

The Young and the Restless spoilers say Summer will make a daring move. Y&R’s weekly preview video shows Summer seemingly initiating a kiss, so that would fit the bill. Nevertheless, other reliable spoilers point to Kyle initiating it. In the end, it doesn’t really matter since they’ll both be on board!

It’s possible Kyle or Summer will go for the first smooch before pulling back. Then, the other party could dive in for more. Either way, things are about to heat up – but just how hot will they get? There are no guarantees that Kyle and Summer will stop with just the lip lock. It’ll be interesting to see how far they let themselves take this.

Back in Genoa City, Amanda Sinclair (Mishael Morgan) will hope for the opposite of what Summer and Kyle are doing. They’ll be throwing out the rulebook, but Amanda will want to law down the law. She’ll think it’s time to establish some boundaries, so Billy Abbott (Jason Thompson) may be saddened by the news – at least deep down.

Billy likes feeling free when he’s with Amanda, and boundaries aren’t going to help with that. Naturally, these boundaries probably aren’t going to last. If Amanda feels the need to set them, then it may be because she feels she’s starting to fall for Billy. These two could be headed for a real romance sooner or later!