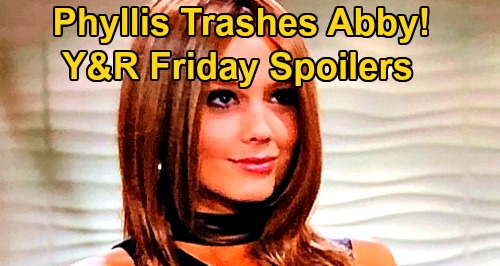 The Young and the Restless (Y&R) spoilers for Friday, March 13, tease that Abby Newman (Melissa Ordway) will be all set to impersonate her nemesis. In Thursday’s episode, Abby dons her Phyllis Summers (Michelle Stafford) getup and makes all the final preparations. The plan is to pose as Phyllis at the bank and score access to her safety deposit box.

From there, Abby intends to retrieve the final copy of the incriminating recording and give Chance Chancellor (Donny Boaz) an opportunity to destroy it. Of course, plans tend to go awry in Genoa City – and this one will be no different.

On Friday, Y&R spoilers say Phyllis’ unexpected arrival will shake things up for Chance and Abby. After Phyllis bangs on Chance’s door, Abby will have to duck out of sight.

The Young and the Restless spoilers say Abby will hide out in Chance’s bathroom. Abby won’t want the enemy catching glimpse of her in a red wig and Phyllis-ish dress! Unfortunately, Phyllis will be a loudmouth as usual. She’ll start up her typical Abby trash-talking, which will really rile Abby up.

As Phyllis hurls insult after insult, Abby will struggle to contain the rage that’s building. She’s always had a hard time holding her tongue when it comes to Phyllis.

Their rivalry is intense, so Abby may end up coming out to defend herself. Whatever the case, this impersonation plot may be over before it ever truly begins. There’s a good chance fake Phyllis aka Abby will get busted!

Nate Hastings (Sean Dominic) warned that Victoria needed time for her emotional wounds to heal, but her behavior will remain unsettling. Nikki will worry about her daughter being pushed to her breaking point.

Victoria may not have a positive response if Nikki oversteps or comes on too strong. Nikki can’t rush the recovery process as much as she may want to.

The Young and the Restless spoilers say Nikki may just have to be patient. She might make some updates to how she handles this down the road, but Victoria gets to make the rules for now.

Let’s hope good news is coming regarding Victoria’s condition sooner or later. She deserves a bright future after all the trauma she’s endured.

It sounds like some interesting developments are in the works. Y&R fans will want to check back for more updates and news. We’ll provide all the latest Young and the Restless spoilers and shockers.

Oh man!! @MelissaOrdway is a better me than ME! #smokeshow #YR pic.twitter.com/LdAhJrB5oJ