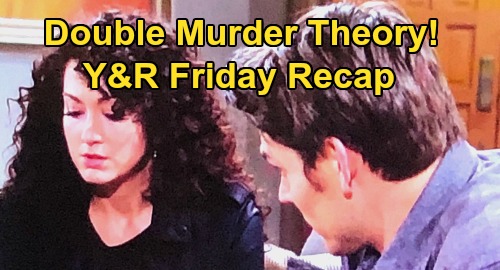 The Young and the Restless (Y&R) spoilers recap for Friday, March 20, teases that Victoria Newman (Amelia Heinle) will get a checkup at the ranch. Nate Hastings (Sean Dominic) will ask Victoria a few questions to see how her recovery is coming along. Victoria will admit her appetite is back with a vengeance and she’s been sleeping a bit better than she has been.

Nate will hear about Victoria’s sneaky trip over to Newman Enterprises, but Victoria will insist it was just a quick visit to check on things. Y&R spoilers say Nate will offer some advice before he goes.

If Nikki Newman (Melody Thomas Scott) and Victor Newman (Eric Braeden) expect Victoria to be honest, they have to be opening to hearing whatever she’s feeling.

Victor and Nikki will also mull over the possibility of a trip for Victoria. The warmer weather and ocean breeze might do Victoria a world of good. However, Victoria will get fed up with all the fuss.

Y&R spoilers say Victoria will be eager to get back on the Newman throne where she belongs. That way Nick Newman (Joshua Morrow) can reclaim his old life and her parents can stop worrying about her.

Later, Victoria will sit on the sofa for a heart-to-heart with Victor. They’ll connect as they talk before Victor pulls Victoria in for a hug. It’s nice that Victoria’s got a support system to lean on during this difficult time.

At the penthouse, Adam Newman (Mark Grossman) and Chelsea Lawson (Melissa Claire Egan) will talk about what might’ve happened in Kansas. Adam’s stepfather, Cliff, died in a wreck – but what if that wreck wasn’t an accident?

Chelsea and Adam will consider the possibility that Alyssa Montalvo’s (Maria DiDomenico) father, AJ the loan shark, was behind Cliff’s death.

Of course, that would’ve given Victor a motive to go after AJ. Victor might’ve killed AJ to make sure Hope Wilson (last played by Beth Toussaint) and Adam were protected.

Since Adam intends to get to the bottom of this mystery, he’ll welcome Alyssa for a visit after Chelsea leaves. Alyssa will talk about having lingering questions that bother her about her father.

The Young and the Restless spoilers say Adam will bring up Cliff and wonder if maybe he secretly went to AJ for a loan. As the conversation continues, Alyssa will realize Adam suspects AJ was to blame for Cliff’s “accident.”

Despite Adam’s efforts to handle this delicately, Alyssa will fly into a rage. She’ll insist this is nothing but wild speculation and character assassination. There are no facts or data to back it up.

Adam will push Alyssa to stay and hear him out. There’s more to the story if Alyssa would just stick around and listen. Nevertheless, Alyssa just won’t see the point when Adam doesn’t have any solid evidence of a crime.

At the Grand Phoenix, Phyllis Summers (Michelle Stafford) will catch up with Amanda Sinclair (Mishael Morgan). They’ll discuss Chance Chancellor (Donny Boaz) along with Amanda’s changing plans. Since opening a brand-new practice is such a massive undertaking, Amanda will think maybe it’s best to go in another direction.

Talk will turn to Phyllis’ love life, but Phyllis will want to keep the details to herself. Amanda will push for the guy’s name and will think she knows a Cheshire cat grin when she sees one. Phyllis will plead the fifth as these friends bond at the bar.

Their conversation will also lead to questions about the nature of Amanda’s relationship with Nate Hastings (Sean Dominic), which will make her uncomfortable. Soon after, Nate will deliver some troubling updates to Amanda. It turns out Jared (Michael Maclane) is in jail, so Amanda will certainly hate to hear this news.

At Society, Chelsea will find Nick sitting at a table. The Young and the Restless spoilers say Nick will admit he’s on red alert. Nick will insist he knows Adam’s up to something.

Chelsea will snark about how noble it is of Nick to protect his family, but Nick will feel like he’s genuinely doing what’s best. Adam’s someone who’s “repeatedly and viciously attacked” the Newman clan, so Nick will remain on guard. Chelsea will fire back about how Adam always has to feel like an outsider in his own family.

Afterward, Chelsea will spot Alyssa and join her at the bar. During their discussion, Chelsea will mention Adam’s suspicions about Victor murdering AJ. Alyssa will seem deep in thought after Chelsea pretends she’s said too much and scampers off.

In reality, Chelsea knew exactly what she was doing! Once Chelsea brings Adam up to speed at the penthouse, he’ll be impressed over her laying it on thick. Back with Victor, he’ll don his glasses and look at a copy of AJ’s obituary. It sounds like some hot drama’s on the way, so don’t miss what’s in store. Stick with CDL for even more Young and the Restless spoilers, updates and news.