The Young and the Restless Spoilers: Friday, May 29 – Sarah Assumes Lauren’s Identity – Lily To Continue Chemotherapy

BY hellodrdavis on May 28, 2020 | Comments: Leave Comments
Related : Soap Opera, Spoiler, Television, The Young and the Restless 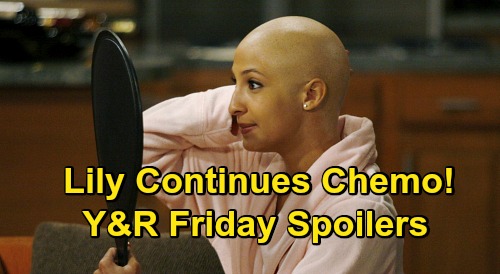 The Young and the Restless (Y&R) spoilers for Friday, May 29, tease that viewers will see an encore episode of that originally aired on April 27, 2010. In the episode, which is part of “Villains Week” on Y&R, Sarah Smythe (Tracey E. Bregman) will be impersonating Lauren Baldwin (Tracey E. Bregman) while Lauren and Jana Hawkes (Emily O’Brien) are tied up in a cage at an abandoned zoo.

Lauren and Jana will unsuccessfully try to break free, and they’ll have nothing else to do but distract themselves by discussing what they’re going to do when they’re free. Jana will just want to go be with Kevin Fisher (Greg Rikaart), and Lauren will vow never to take her family for granted again.

Over at that Romalotti house, Daniel Romalotti (Michael Graziadei) and Amber Moore (Adrienne Frantz) will find themselves at odds over Amber’s feelings for Little D. Amber will miss being a mother, while Daniel will miss what he and Amber used to have together.

Meanwhile, Michael Baldwin (Christian LeBlanc) will call Kevin from the police station to say that Ryder has just been hauled in. Kevin, who will be with Fenmore “Fen” Baldwin (Robbie Tucker) at Crimson Lights, will call Daniel to say he’s bringing Fen over so he can get over to the station to grill Ryder about Jana’s whereabouts. Sarah (posing as Lauren) will overhear this, and she’ll question whether Kevin should go.

Kevin will retort that needs to find Jana, and he thought that Lauren would understand that. Kevin will take off with Fen, and Sarah will call Daisy to warn her that she needs to do something because Kevin is on his way to question Ryder.

Kevin will drop Fen off at the Romalotti house with Amber and Daniel, and soon Daniel and Fen will leave for a baseball game.

Their argument will intensify, and it won’t end on good terms. Amber will remark that their love just isn’t enough anymore, and Daniel won’t respond.

At the police station, Michael will question Ryder about Lauren, whom he’ll say hasn’t been acting like herself. Ryder won’t give anything up. Kevin will then show up and talk with Ryder.

Kevin will explain that Jana is gone and that he wants her back. Ryder will indicate that Jana will be back soon, and Kevin will get frustrated, even offering to protect Ryder from whomever he’s scared of, but Ryder won’t talk.

Michael and Kevin will catch up in the hall, and a few minutes later, they’ll discover that Ryder is gone. A guard will explain that Ryder has just been bailed out. Daniel will call Michael to say that “Lauren” picked up Fen from the house.

At Crimson Lights, Sarah (as Lauren) will be with Fen when she gets an incoming call from Michael. She won’t answer it, saying to herself that Michael will have to wait, and that it won’t be long until this is all over.

Meanwhile, at the hospital, Cane Ashby (Daniel Goddard) will chat with Jill Abbott (Jess Walton). Jill will ask Cane if he knows who Tucker McCall (Stephen Nichols) is planning to put in charge of Jabot. Cane won’t think that Jill is on Tucker’s list of possibilities.

Jill will take off, and Lily Ashby (Christel Khalil) and Mackenzie “Mac” Browning (Clementine Ford) will arrive for Mac’s ultrasound. Mac will enter the exam room, and Lily and Cane will discuss Lily’s treatment options. Lily will say that her doctor wants her to begin chemotherapy again. Lily won’t be sure that she’ll survive more chemo.

When Lily and Cane join Mac in the exam room, they’ll soon learn that they’re having a boy and a girl. Cane and Mac will be thrilled, but Lily will be pensive, clearly thinking about he possibility that she might not be there for her kids down the line.

Later, Lily will tell Cane that she’s decided to start chemo again, and Cane will think that keeping Lily around is the most important thing in the world.

Next, at Ashley Abbott’s (Eileen Davidson) place, she and Neil Winters (Kristoff St. John) will be canoodling and preparing for a romantic evening when Tucker shows up. Neil and Ashley won’t be happy to see Tucker, who will be clearly interrupting their evening. Tucker won’t care, as he’ll want to talk to Ashley about running Jabot.

Ashley will be surprised, and Tucker will explain his stipulation – no other Abbott can work for Jabot if she came on board. After Tucker leaves, Ashley will tell Neil that she’s thinking about the offer.

Neil won’t trust Tucker, but Ashely will point out that Neil trusted Victor Newman (Eric Braeden), which Neil will say is different. Soon, Neil and Ashley will get back to their romantic evening, vowing to stop talking about Tucker.

Later, Tucker will be at the GCAC when Jill approaches him waving a white napkin and wanting a truce. Jill will ask Tucker if he’s found someone to run Jabot. Tucker will say that he has found the right businesswoman, and Jill will think that he’s talking about her.

Jill will soon realize that Tucker is talking about someone else, and she’ll douse Tucker with her drink before leaving.

It sounds like viewers can expect some great Y&R drama on Friday’s encore episode, so stay tuned! Stick with the CBS soap and remember to keep CDL at the ready for the latest Young and the Restless updates. We’ve got your show spoilers and news right here!