The Young and the Restless Spoilers: How Eric Braeden Can Film New Y&R Episodes Under COVID-19 Restrictions – Victor’s Illness

BY Sean O'Brien on May 24, 2020 | Comments: Leave Comments
Related : COVID-19 NEWS, Soap Opera, Television, The Young and the Restless 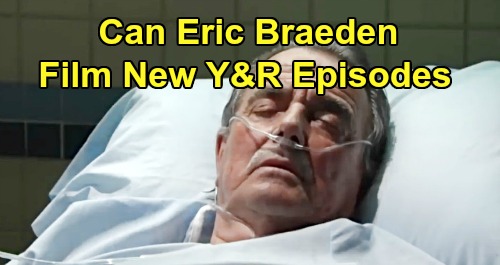 The Young and the Restless spoilers document that Victor Newman (Eric Braeden) was diagnosed with a rare blood disease in the recent past. Y&R could use this to include Eric Braeden, and of course Victor Newman, when filming new episodes, despite his age which is 79, and new California COVID-19 production protocols.

Victor seems to have the condition controlled through a medication regimen and in having stepped back from the helm at Newman Enterprises. However, the aggressive nature of Victor’s condition can allow for a sudden, unanticipated setback. Just as quickly as the disease impacted the Moustache’s life before it was officially diagnosed, so can it strike him again in a resurgence.

Young And The Restless Spoilers – Adam and Victor at war?

Adam Newman (Mark Grossman), believing that his father tried to have him killed, responded by double-dosing Victor’s medication. As viewers recall, Braeden’s character became aware of what was happening and then sold a death hoax that Adam bought.

Considering his cunning and recent experience, it’s fair for viewers to believe that Adam would be skeptical of any further dramatic claims, even if Victor is simply weakened by a legitimate worsening of his condition. Adam’s reaction would mostly be fueled by the fact that he’s fighting with Victor because of the Kansas reveal.

Adam believed that Alyssa Montalvo (Maria DiDomenico) uncovered information that appeared to make Victor look guilty of having killed her father. Victor later claimed otherwise, saying that Adam acted in defense of his mother and blocked out what happened all those years ago.

A true change in Victor’s condition can allow Adam to redouble his efforts to seize power from his sister. She’ll be naturally distracted by concern for their father, with Adam playing a similar financial hand as when he purchased Nick Newman’s (Joshua Morrow) debt at Dark Horse.

COVID-19 virus guidelines and other protocols are currently said to be part of whatever return to work scenario is developed in California, where The Young and the Restless will be recording new episodes.

Various mature actors fall into a special category of employees (due to age) who won’t be able to return to the set if production begins in June, or possibly anytime this summer. But Eric Braeden and some other cast members could work from home, or a safe non-set location.

A revamped storyline can be presented that presents Victor in a previously unseen part of the main house at the Ranch, or some other location, where he’s receiving treatment. This would further the overall arc and allow Y&R’s lead male character to remain on-camera.