The Young and the Restless Spoilers: How to Fix Theo Vanderway – What Y&R’s Doing Wrong With Tyler Johnson – What They Can Do Better

BY Heather Hughes on May 12, 2020 | Comments: Leave Comments
Related : Soap Opera, Spoiler, Television, The Young and the Restless 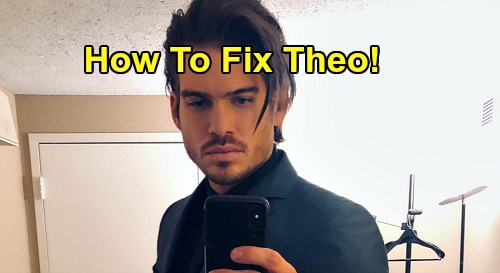 The Young and the Restless (Y&R) spoilers reveal that there have been some writing missteps with Theo Vanderway (Tyler Johnson), but it’s not too late to turn things around. If Y&R wants Theo to have staying power in Genoa City, changes need to be made. So what’s wrong with Theo and how can the show make it better? Here are some easy ways to fix Theo Vanderway when Y&R begins filming new episodes.

For starters, The Young and the Restless writers need to decide if Theo’s going to be bad boy or a misunderstood teddy bear – because he can’t be both. One minute Theo’s sexually harassing Tessa Porter (Cait Fairbanks) and the next he’s a goofball passing out at the sight of blood in Lola Rosales’ (Sasha Calle) kitchen. Theo’s bonding with Granny and then he’s cheating to win a business battle.

Theo’s a manipulative schemer – no, he’s a big marshmallow – no, he’s…well, what is he exactly? It’d be best for Y&R to settle on a clear direction for Theo. If they want to make Theo the Adam Newman (Mark Grossman) of the younger bracket, that’s great. If they want to steer away from Theo’s dark side, then he needs to truly learn from his mistakes and redeem himself.

Of course, some might argue that Theo actually works best as a firm bad boy. The trouble is The Young and the Restless can’t commit to that when Theo’s trying to woo someone like Lola. Chelsea Lawson (Melissa Claire Egan) is Adam’s ride-or-die girl, even when he’s behaving badly. Maybe Y&R would be better off pairing Theo up with someone like that instead of someone he has to be “good” for.

Furthermore, it’s fine for Theo to have some swagger, but he’s kind of like a sleazy used car salesman sometimes – right down to the flashy suits. If Y&R could rein that in a bit and let Theo back up his confidence with some success, that’d be beneficial to the character. Theo blew it at Jabot, but let’s see him thrive in a new position at Chancellor Communications instead of bumbling through it.

Finally – and this is VERY important – not everyone on canvas has to like or make peace with Theo. He’s earned his enemies, so let him keep them! It feels like propping when even people like Kyle Abbott (Michael Mealor) and Mariah Copeland (Camryn Grimes) have to battle regrets over Theo or bond with him in some way. It zaps any bad boy appeal right out of him if all of GC feels for “poor Theo.”

How do you feel about Theo Vanderway? Would you like to see some changes in his character? As other Y&R news pops up, we’ll provide all the latest updates. The Young and the Restless spoilers say some hot drama’s looming once new episodes return, so stay tuned. CDL’s your go-to source for exciting Young and the Restless spoilers, updates and news.