The Young and the Restless Spoilers: Impeachment Trial Preemptions – What Y&R Fans Can Expect 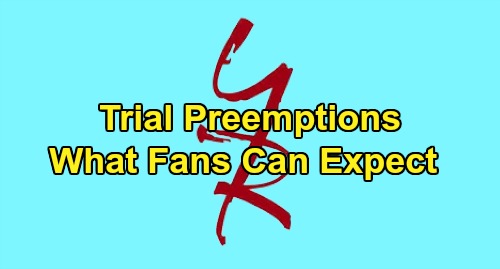 The Young and the Restless (Y&R) spoilers reveal that the Trump impeachment trial will bring some schedule changes. It looks like CBS plans to air coverage, so Y&R should be preempted in many areas. Of course, the show should make an official announcement at some point, but there’s no word from them just yet.

As for the overall plan for the episodes, nothing’s been confirmed. The Young and the Restless has a few options to consider. If there are breaks that coincide with Y&R’s main timeslot, they might be able to air some of the show and throw the whole thing up online later.

Even if Y&R can’t air any of the show, they could still put the episodes online and let fans seek them out.

That seems to be the plan for Days of Our Lives, so it’d be wise for The Young and the Restless to keep up with the times. Plenty of people watch online anyway or are at least willing to make the effort.

That’s especially true when the alternative could be waiting weeks for episodes to air – and putting the show weeks behind.

For example, Genoa City’s upcoming Valentine’s Day celebrations would be delayed significantly. It can be kind of a pain when GC’s still stuck on holidays that are over!

Of course, Sharon Newman’s (Sharon Case) cancer storyline is just now kicking into high gear. We’ve also got some other big stories heating up, so now’s not the time for the show to lose momentum.

However, that’ll ultimately be Y&R’s call. They’ll either make the episodes available online or hold them back to air when they can. As more info comes in on CBS Daytime’s plans, we’ll pass that news along.

As for what’s ahead on Y&R, The Young and the Restless spoilers say some shockers and shakeups are brewing. Kyle Abbott (Michael Mealor) will betray Lola Abbott (Sasha Calle) by kissing Summer Newman (Hunter King), but is that all they’ll do?

Summer and Kyle will be in a hotel suite, so there’s always the potential for a deeper betrayal.

Amanda Sinclair (Mishael Morgan) and Billy Abbott (Jason Thompson) will also have a chat about boundaries. The Young and the Restless spoilers say Amanda will push for some, but they may make some promises they can’t stick to. Meanwhile, Phyllis Summers (Michelle Stafford) has a major setback headed her way.