The Young and the Restless Spoilers: Is Summer and Kyle’s Future Doomed – Troubling Signs Ahead for ‘Skyle’

BY Heather Hughes on February 22, 2020 | Comments: one comment
Related : Soap Opera, Spoiler, Television, The Young and the Restless 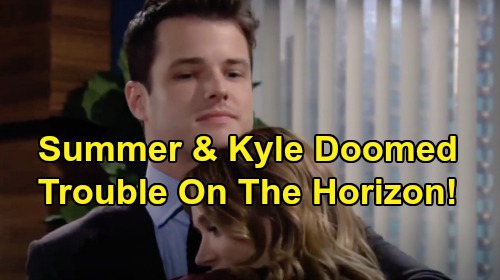 The Young and the Restless (Y&R) spoilers tease that Jack Abbott (Peter Bergman) will remain wary of Kyle Abbott’s (Michael Mealor) quick reunion with Summer Newman (Hunter King). Y&R fans know Kyle eventually determined that his heart just wasn’t in his marriage to Lola Rosales (Sasha Calle). It was a tough realization, but Kyle had to accept that Summer was the one he was meant to be with.

Of course, “meant to be” is a tricky concept on soaps! As we’ve seen throughout this whole “Kola” and “Skyle” saga, a couple can go from destined to scrapped and back again. It’s really all a matter of what the writers need in that moment and sometimes what factors are going on behind the scenes.

In this case, there are indeed some factors to be concerned about when it comes to Summer and Kyle. King scored the leading role on a new ABC pilot called “Prospect” and seems quite interested in continuing her primetime career.

Whether that pilot’s picked up or not, King’s a great actress and could easily find work outside of Y&R if she’s looking – and she seems to be based on this scored pilot.

In other words, “Skyle’s” future is far from secure at this point. All they have is here and now, which is what they’ll enjoy during the week of February 24-28. The Young and the Restless spoilers say Kyle and Summer will struggle to hold back their excitement over being together. Summer previously scolded Kyle for planting kisses at the office, but she’ll throw her business rulebook out the window.

It looks like Summer and Kyle will get busy at the office, which could bring some snarky comments from Theo Vanderway (Tyler Johnson). He has a knack for butting in other people’s business and pushing all the right buttons. However, Kyle may finally be able to move past Theo getting under his skin.

Summer pointed out that Kyle was using Theo as a way to stir up some passion in his relationship with Lola. Kyle’s got the girl he wants now, so he doesn’t have to do that anymore. Theo’s never going to be Kyle’s favorite person, but he should be able to tolerate his cousin a bit better now.

That could be part of the reason Jack eventually offers his blessing to the happy couple. He may see this love rapidly blooming and Kyle’s new maturity around Theo. Jack may determine that maybe Kyle and Summer know best. He only wants the best for both of them, so Summer and Kyle will indeed get Jack’s seal of approval.

Naturally, it could be a soapy sign of trouble as more people get on board. Is Kyle and Summer’s future doomed? Will they get the happily ever after they seek or will it all fall apart soon enough? That may depend on King’s career outside of Y&R! The Young and the Restless spoilers, updates and news say it’ll be interesting to see what’s ahead for “Skyle.”

Are you rooting for Summer and Kyle or would you rather see them paired up with other people? We’ll keep you posted as other romantic shockers and shakeups emerge. Stick with CDL for all the latest Young and the Restless spoilers, news and updates.