The Young and the Restless Spoilers: Is Summer Pregnant – Devastating Blow For Lola During Kyle Divorce Proceedings? 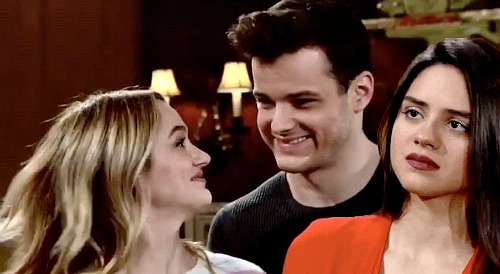 The Young and the Restless spoilers tease that Lola Rosales (Sasha Calle) has been having a tough time lately. As Y&R viewers know, Lola and Kyle Abbott (Michael Mealor) are just getting their divorce process started, and it’s an emotional time for them both. But for Lola, it’s an especially poignant time because she’s watching Kyle immediately move on with Summer Newman (Hunter King).

Lola can’t seem to get away from Kyle and Summer’s romance. During the ice storm, “Skyle” sought refuge in Society with Lola and Theo Vanderway (Tyler Johnson), which was bad enough, but now it seems that every time Lola turns around, Kyle and/or Summer are right there to remind her of what she’s lost.

So far, it seems like Lola and Kyle are planning on working toward an amicable divorce. Lola could certainly make the process contentious if she wanted to, given that Kyle had feelings for Summer during their marriage, but so far Lola is taking the high road and opting to end the marriage on good terms and as quickly as possible.

But this all seems way too easy. Certainly, something is going to come up that will add a big wrinkle to the mix, and it could have to do with Kyle’s relationship with Summer.

Kyle and Summer have been together nearly nonstop since the moment he split with Lola, and it seems that if a pregnancy were ever going to happen for Summer and Kyle, now would be a pretty bad time for it to happen for everyone involved.

With divorce proceedings coming up, it would look pretty bad for Kyle if his new woman turned up to be pregnant. Not only would it be Genoa City gossip fodder, but it might hurt Kyle in the divorce, if Lola decides to make an issue of it. Of course, if Summer does turn up pregnant, then that will be tough for Lola to take on an emotional level.

Of course, Y&R viewers will remember back when Lola and Kyle were together, and Lola thought for a hot minute that she might be pregnant. Lola was excited about it, but Kyle was absolutely horrified by the idea.

So, not only will Lola be facing the dissolution of her marriage, she’ll also be facing all the joy and happiness that Lola and Summer will be experiencing as they prepare for their new addition. Lola will probably bump into a glowing and pregnant Summer at every turn, and you just know that Summer will ultimately have her baby shower at Society!

At any rate, a Summer pregnancy at this point would be a tough situation for Lola to face as she tries to move on with her life at a pace that’s right for her. Do you think that Summer will wind up pregnant?

Stick with the CBS soap and don’t forget to check CDL often for all your Young and the Restless news. We’ll keep you up to date with all the latest Y&R spoilers as we hear them!