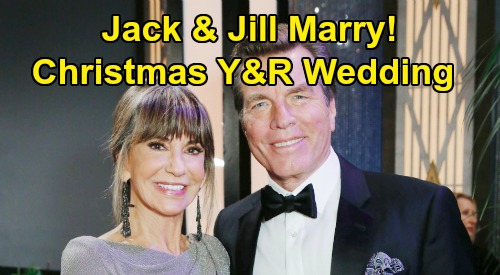 The Young and the Restless spoilers document Jack Abbott (Peter Bergman) and Jill Abbott (Jess Walton) were a one-time romantic partners. Based on developing circumstances and their current mutual availability, it’s fair to project that they will reconnect.

Pushing matters further and in consideration of the chemistry that viewers saw when new episodes were last airing, predicting a Christmas wedding isn’t far-fetched. That development would build off show history and an evolving Abbott family crisis in order to created a believable present day storyline.

Young And The Restless Spoilers – John Abbott Was Deeply Hurt

Longtime Y&R fans know that Jill went to work for Jabot Cosmetics in the 1980’s. She and the company’s founder, John Abbott (Jerry Douglas), fell for each other and became involved.

However, Jill began cheating on John with his son, Jack. That hurt John badly and caused Jill to file a harassment suit against Jack. A sizable settlement followed.

John and Jill later married, with Walton’s character infamously coercing him to have a child. Billy Abbott (Jason Thompson) is their son.

Jack hasn’t been with anyone in awhile. Family matters related to his mother, Dina Mergeron (Marla Adams), have drawn the entire Abbott family’s interest to her during the past three years.

Devoted viewers have taken note that Jill’s past battle with Dina over John wasn’t overly mined after Adam’s return to the cast in 2017, as the Alzheimer’s diagnosis made that type of plot line revisit a non-starter.

Jill was married to Colin Atkinson (Tristan Rogers) for many years. Jilin was an engaging couple, but Colin broke Jill’s heart. In that instance cheating wasn’t the issue. Instead, greed did Atkinson’s character in, with Jill filing for divorce.

Young And The Restless Spoilers – Dina Mergeron Death a Trigger

Viewers recall that Jack began complimenting Jill just prior to the production shutdown. He appeared to be flirting with her and she noticed.

Whether Jack and Jill will go up couple’s hill remains to be seen, but that classic nursery rhyme is a catchy reference that could take the place of a nickname. Here’s hoping that two great, longtime actors are given the opportunity to forge a real relationship.

Neither character has any existing ties. It seems possible that the arc Adams is playing could wrap before year’s end when Dina Mergeron dies. Jack would be devastated if that happens and seek solace with a friend. From that jumping off point an impulse marriage could happen. Whether that compelling union would last is another question.