The Young and the Restless Spoilers: Jack Becomes A Grandfather In 2021 – Summer & Kyle’s First Baby Born? 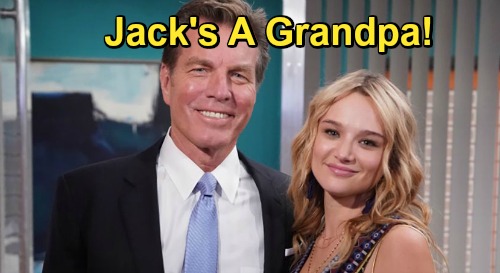 The Young and the Restless spoilers document that Jack Abbott (Peter Bergman) has been living a Limbo-like existence in 2020. While business efforts continue to flow well, his personal life is stuck.

Once upon a soapy time Jack was either married, involved, or living happily as one of Genoa City, Wisconsin’s, most eligible bachelors. Today, in his mature years, after having not been married since 2016, and being unwilling to even consider any romantic prospects, Jack seems to have lost belief in himself.

Y&R’s brilliant storyline created the write-back of Dina Mergeron (Marla Adams). The years-long arc proved out as meaningful as it was memorable.

Dina’s death this fall was anticipated, due to her deteriorating Alzheimer’s condition. While Jack and his family were preparing for that eventually, the finality of it hit him hard. He’s dealing with it, seemingly in a healthy way, but he’s also grieving the loss and will naturally continue to do so into the new year.

It appears as though Skyle will remarry in the not too distant future. Jack’s son, Kyle Abbott (Michael Mealor), and Summer Newman (Hunter King), love each other and have matured greatly since their first, brief marriage.

Becoming the father of the groom will make Jack smile. Focusing on Skyle’s future can also involve news that Summer is pregnant expecting the couple’s child. That next step seems inevitable and would provide great drama.

If the above happens, then Jack will welcome his first grandchild into the world. Yes, birth of a baby can and should comfort hearts that have been affected by death, like Jack’s has.

Young And The Restless Spoilers – It’s Time To Try Again

A noteworthy exchange took place in the relatively recent past, Jack asked Victor Newman (Eric Braeden) for advice. The request was sincere and the Moustache’s take was followed, as Jack visited a resort and returned with a refreshed sense of himself.

As the new year unfolds, rather than making a series of resolutions, Jack can resolve to pursue one goal. He should seek love, as he believed Dina wanted him to do. And that effort should go beyond maintaining positive family ties.

Here’s hoping that Y&R writes a new lady into Jack’s life, or a revived love. Yes, he has a checkered romantic history. But yesterday isn’t fated to be tomorrow.

Next week on #YR, Billy senses jealousy from Victoria, Jordan pressures Faith to make a bad decision, and Amanda might have found her birth mother! pic.twitter.com/rK8iWWHY2X