The Young and the Restless Spoilers: Kyle’s Sweet Resolution With Lola – Summer’s Bright Future At Risk? 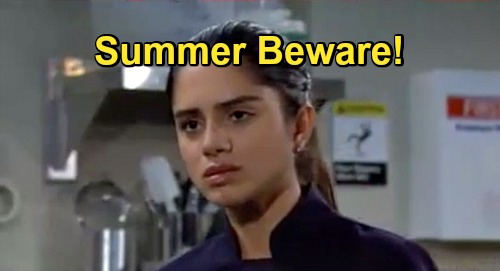 The Young and the Restless spoilers document that Kyle Abbott’s (Michael Mealor) ability to reach an honest resolution with Lola Abbott (Sasha Calle) will impact Skyle. But the effect won’t be fully known for awhile.

Summer Newman (Hunter King) isn’t bothered by Lola, as she once was. Viewers recall that feeling drove Summer’s angst during the lead in to the Kola marriage.

The future appears to be bright, as Skyle moves through engagement toward its own altar plans. But Genoa City, Wisconsin, has long been filled with drama and projects as that with this pairing, or triangle as well.

Young And The Restless Spoilers – Kola Gone Forever, Or Not?

Forever is a long time, especially in the daytime world. So, could Kyle and Lola reconcile years from now? Sure. But in the short-term it would appear logically unlikely.

But logic isn’t emotion and Kyle’s fondness for Lola has never been in question. Instead, the depth of his love is infinitely deeper than it was for Lola, which Kyle remorsefully admitted, when pressed.

Skyle didn’t replace Kola. Summer and Kyle were never over, which she knew before Kyle eventually came to the same conclusion.

Young And The Restless Spoilers – Lola Rosales Is Resilient

Lola moved to GC from Miami, Florida. She joined her brothers and began a new life. Her professional and personal success was equally rapid, until the Kola marriage unraveled.

A personality point was reinforced through the restaurant Lola tried to open in Miami. That effort failed, with Lola shrugging the event off.

But she hadn’t been able to move quickly past the end of her first serious relationship, which led to marriage. That’s fully human and also makes the timing of the rapprochement with Kyle believable. Time doesn’t heal all soapy wounds, but does allow for other storylines to develop.

Young And The Restless Spoilers – Kyle Abbott Must Remain Committed

Kyle felt used by Summer in the past. He didn’t like the personality she took on during her time away from home and initially attempted to avoid her. Eventually, Summer forced Kyle to marry in exchange for the half-liver donation to Lola.

It’s right to feel that Summer is different now, as compared to a year, or more ago. The same is true for Kyle, with Skyle fans being hopeful that he keeps that point at the front of his mind.

Lola and Kyle can become friends who aren’t overly invested in each other’s personal lives. For the time being that approach should help Skyle succeed, but will it last? It wasn’t long ago that Kyle and Lola were madly in love and Summer was used and abused as a liver donor….