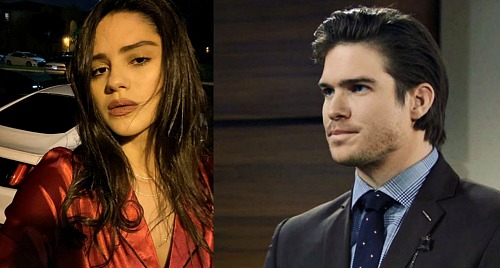 The Young and the Restless (Y&R) spoilers tease that a couple of big exits seem to be in the works, so we should talk about how they might play out. According to an insider report, Sasha Calle (Lola Rosales) and Tyler Johnson (Theo Vanderway) are set to depart the CBS soap.

Of course, we should point out that sometimes characters can technically remain on recurring while being off canvas. Zach Tinker reprises his role as Fenmore “Fen” Baldwin occasionally, but Fen moved to Nashville and isn’t part of the usual action.

In other words, it’s possible for an actor to play a recurring Y&R character without being in Genoa City consistently.

All signs point to Calle and Johnson being off contract, so let’s look at what we know so far. Lola’s got a built-in exit route through this Miami restaurant, which she recently left town to handle an issue at. It’d be weird for The Young and the Restless writers to ditch the departure strategy they already created for Lola.

Would they really derail Lola’s restaurant dream? Lola also has family in Miami, so why would she bail on them for some shaky new romance with Theo – especially after his latest Jabot stunt? This Miami exit makes the most sense.

Meanwhile, Theo starts longing for the good old days of New York in the episode set to air on April 20. After getting fired at Jabot, Theo talks to Dina Mergeron (Marla Adams) about having revolutionary ideas in NYC. He flat-out says, “I wish you had known me back in New York.”

This could be a clue about where Theo’s headed: back to New York. Kyle Abbott (Michael Mealor), Summer Newman (Hunter King) and Mariah Copeland (Camryn Grimes) have all urged Theo to return there, so maybe he’ll finally take the hint and do it.

There’s no point in letting a Lola and Theo love story happen offscreen. Lola’s already been hesitant to get involved with Theo. After getting burned by Kyle, Lola understandably hasn’t been in a big rush to jump into something new. Will Lola see Theo’s true colors after all his cheating and stealing at Jabot?

That might be enough to turn Lola off to the whole idea of dating Theo. Lola might be pretty disgusted and just decide to do her own thing. There’ll be nothing left for Theo in GC without Lola, so he may back his bags and give New York another shot.

Bottom line, the writing’s still on the wall for Lola and Theo to be off canvas. It’s easy to see all the exit details coming together. As other Y&R news comes in, we’ll pass along updates. The Young and the Restless spoilers say some hot drama’s on the way, so stay tuned. CDL’s your go-to source for Young and the Restless spoilers, updates and news.