The Young and the Restless Spoilers: Lola & Theo’s Hot Miami Nights – Leap From Friends To Lovers On Dream Restaurant Trip?

BY Heather Hughes on February 22, 2020 | Comments: one comment
Related : Soap Opera, Spoiler, Television, The Young and the Restless 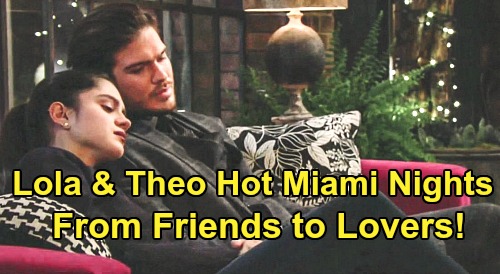 The Young and the Restless (Y&R) spoilers tease that Lola Rosales (Sasha Calle) will focus on her future. Y&R fans know Lola recently cleared the air with Kyle Abbott (Michael Mealor) and Summer Newman (Hunter King). She could choose to hold a grudge or wallow in self-pity, but neither of those things would accomplish much.

Lola’s always been a fighter, so she’d rather sink her energy into something worthwhile. That’s why Lola’s decided to open a restaurant in Miami. She intends to travel back and forth as needed, but this restaurant is obviously something that’s important to her.

It’s been Lola’s dream since she was a little girl, so she’ll undoubtedly pour her heart and soul into it.

Theo Vanderway (Tyler Johnson) should admire Lola even more as she sinks so much of herself into this passion project. Although Theo’s interest in Lola was once about getting under Kyle’s skin, he’s truly developed feelings at this point. Now that Kyle’s back with Summer, there’s no reason Lola can’t move on as well.

Theo turned down a hookup not too long ago, but that’s only because he wants to do this right. He was being smart about the situation. For starters, Theo made himself look more appealing – like he had more self-control than Kyle. He also showed respect for Lola and prevented her from having regrets.

There was likely some manipulation involved since that’s just who Theo is, but it was indeed wise not to jump in bed with Lola. They need to take their time and let things heat up naturally. Since Y&R’s brought up this Miami restaurant, it presents an opportunity for a trip – one that Theo’s part of.

Are Theo and Lola headed for some hot Miami nights? If Summer can kiss Kyle in San Francisco and kick off “Skyle’s” new chapter, why not let Lola and Theo’s fresh start happen in Miami? That could be where they finally land in bed together.

It’s easy to imagine Theo making a grand gesture like using his connections and helping with some restaurant details. Theo might pitch in during an upcoming Miami visit and touch Lola’s heart.

The Young and the Restless spoilers, updates and news point to something pulling them together eventually. One way or another, Lola and Theo should take the leap from friends to lovers.