The Young and the Restless Spoilers: Lola Calls It Quits With Theo – Kyle Takedown Plot With Kendra The Last Straw?

BY hellodrdavis on March 28, 2020 | Comments: one comment
Related : Soap Opera, Spoiler, Television, The Young and the Restless 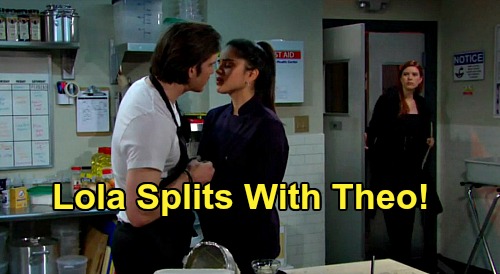 The Young and the Restless spoilers tease that Lola Rosales (Sasha Calle) might soon find herself absolutely horrified with her new beau. As Y&R viewers know, Lola is amenable to seeing where things go with Theo Vanderway (Tyler Johnson), but she wants to take things slowly. Lola still feels really burned from her breakup with Kyle Abbott (Michael Mealor) and she doesn’t want to rush things with Theo.

Lola’s a cautious person, and she realizes that there’s still a lot that she needs to learn about Theo. Sure, they share similar backgrounds and upbringings in some respects, and it’s true that they’re much more alike than Lola and Kyle were, but that doesn’t mean that a relationship between Lola and Theo is going to automatically work.

Lola wants to learn more about Theo, hence the need to take things slowly. Well, one big thing that Lola doesn’t know about Theo is that he’s vying to take over Jabot.

Theo is pretty brazen, and he thinks that if he can just dig up some dirt on Kyle, then he can take him down and become the next Jabot golden boy. And so Theo has enlisted the help of Kyle’s assistant Kendra, who is currently snooping into Kyle’s emails and files, in search of whatever dirt she can find.

Kendra is passing all of her information onto Theo, and Theo’s been promising that he’ll take care of her when he’s running the place someday. Of course, this has “disaster” written all over it.

Surely, Lola wouldn’t approve of Theo taking these smarmy tactics to try to overthrow Kyle. Lola would much rather see Theo work hard and come by any promotions or advancement honestly.

Well, it’s probably only a matter of time before Kendra gets miffed with Theo and tells Lola what’s going on. Lola’s already suspicious, since Kendra has come into Society looking for Theo and handing him files. Theo has brushed off Lola’s questions so far, but we’ve got to think that the truth will eventually come out.

And when the truth does come out, Lola is probably going to hit the roof. And knowing how things tends to go on soaps, the truth will probably come out shortly after Lola decides to fully open up her heart to Theo, and/or after they make love for the first time. And we have to think that when Lola finds out about Theo’s takedown plan, she’s going to feel totally disillusioned about him.

And she’ll probably be pretty disappointed in Theo, too. Lola has always felt that she sees something in Theo that no one else does, and that underneath all the bluster, he’s a good guy.

And maybe she thinks that Theo was in the process of changing from always working an agenda to being an honest, sincere guy. Lola should be pretty upset to find that Theo has been continuing to work a major agenda against Kyle.

Stay tuned to the CBS soap and don’t forget that CDL is your trusted source for the latest Young and the Restless spoilers and updates. Keep us bookmarked, and we’ll keep you informed about the latest Y&R news!