The Young and the Restless Spoilers: Mariah Caught Cheating with Lindsay – Furious Tessa Walks In On Hookup 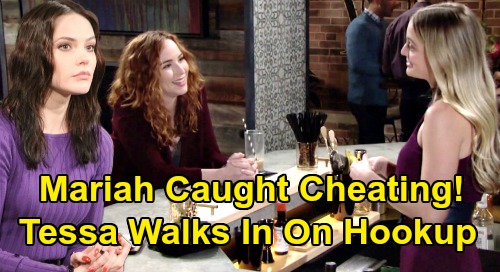 The Young and the Restless (Y&R) spoilers tease that Mariah Copeland (Camryn Grimes) will let her insecurities get the best of her. Y&R fans know Mariah’s been battling concerns about Tessa Porter (Cait Fairbanks), who’s on tour with her superstar ex-husband. Mariah pushed Tessa to follow her dreams and accept Tanner Watts’ (Chase Coleman) offer, but now she’s finding it difficult to be supportive.

Part of that’s due to Tanner’s boundary issues and overall obliviousness. Tessa really needs to set Tanner straight about what is and isn’t OK. However, Mariah didn’t give Tessa much of a chance to explain on their recent video chat. After demanding to know if Tessa slept with Tanner, Mariah abruptly ended the call.

It was easy to see Tessa was trying to reassure Mariah of her love and clear this up. She’s gay by her own words and isn’t interested in Tanner like that, so there’s nothing for Mariah to worry about. Unfortunately, Mariah’s the one who’s going to find herself tempted and will ultimately betray Tessa.

The Young and the Restless spoilers say Mariah will drown her sorrows at the bar before deciding to call it a night. Lindsay (Kirby Bliss Blanton) the bartender won’t think Mariah should be alone, so she’ll decide to head home with her.

Sure, Linds! Just stepping up as a “friend.” Flirty Lindsay seems to have been angling for a hookup since her debut – and she’ll get one by preying on Mariah’s vulnerability.

Mariah thought Kyle Abbott (Michael Mealor) and Lola Rosales (Sasha Calle) were meant to be, so that’s probably fueling her insecurities regarding Tessa, too. Mariah’s whole world is burning down.

Still, there’s no excuse for shutting your partner out and sleeping with someone else. Mariah’s about to screw up big time, especially considering Tessa just left last month!

Tessa sobbed because she wasn’t ready to go and blew one last kiss goodbye in the doorway. That definitely wasn’t a woman who was headed off to cheat, but Mariah’s making assumptions and setting herself up for disaster.

A betrayal would be bad enough, but Y&R will pile on the pain by having Tessa walk in on the aftermath. Mariah will be in a silky robe following this hookup with Lindsay on the couch. When Tessa rushes home to work out her issues with Mariah, she’ll find this heartbreaking and infuriating scene waiting instead.

Tessa has made her fair share of mistakes in this relationship, but there’s been an important distinction. When Tessa blackmailed Sharon and the rest of the cover-up crew, protecting Mariah was at the heart of that mistake.

Tessa had been physically attacked by thugs demanding money, so she needed to keep Mariah and Crystal Porter (Morgan Obenreder) safe.

Even when Tessa initially kept quiet about Tanner being her ex-husband, it was about preserving her relationship with Mariah. Tessa may not always handle things correctly, but her blunders tend to come from a protective place.

Mariah’s mistake will be a far more reckless and selfish one. She’ll be seeking comfort in that moment and will find it on the sofa bed with Lindsay.

Thankfully, this is giving Mariah and Tessa some much-needed drama. They spent most of last year attending parties and playing supporting roles. It’s great that they’ve finally got an actual storyline with more obstacles to overcome.

Cait Fairbanks is still filming regularly and more music is on the way, so it’s basically guaranteed that “Teriah” will survive the storm and come out stronger in the end.

For now, The Young and the Restless spoilers, updates and news say Tessa will face the sting of betrayal. Mariah and Tessa will go through a rough patch as they deal with this messy chapter, but a better one’s waiting on the other side. Patience and communication will be key.

Mariah has shown Tessa compassion throughout their relationship, so now it’s Tessa turn to show that same compassion. Of course, we’ll see fireworks before we begin the long road to forgiveness. Tessa has every right to fly off the handle, so let’s hope she lets Mariah and Lindsay have it!