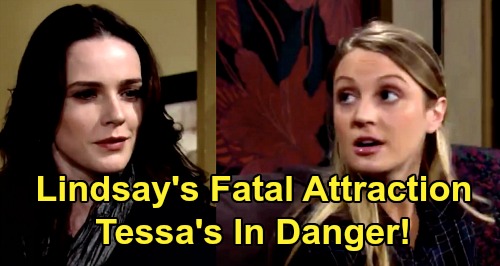 The Young and the Restless spoilers tease that Mariah Copeland (Camryn Grimes) could find herself in a real predicament. As Y&R viewers know, she’s been seriously stressed lately. It’s been hard enough dealing with Sharon Newman’s (Sharon Case) cancer and with the loss of her job at Power Communications, but now she’s got another situation on her hands – her main source of support, Tessa Porter (Cait Fairbanks) is away and so Mariah’s really fending for herself.

And now, she’s dealing with the possibility that Tessa is cheating with Tanner Watts (Chase Coleman) while they’re on the road together. Of course, the two aren’t really cheating, but a few situations have arisen that have given Mariah pause.

Most recently, Tanner appeared on Mariah and Tessa’s video chat shirtless, and the whole thing just seemed suspect. Mariah accused Tessa of cheating, then abruptly hung up on her.

Well, according to Y&R spoilers, Tessa will suddenly appear back home, in order to work things out with Mariah and explain that there’s nothing going on between herself and Tanner.

But when she walks in the door of the apartment that she shares with Mariah, she’ll find Mariah with Lindsay (Kirby Bliss Blanton) and it will be pretty apparent what’s just happened. Lindsay and Mariah will have just made love, and Tessa’s going to understandably freak out.

Well, from here, Mariah and Tessa are going to have some serious relationship problems. Whether or not they’ll be able to work it out or not remains to be seen, but we suspect that Mariah will want to reconcile – that is, if Tessa can find it in her heart to forgive her.

Given all that Mariah has forgiven Tessa for in the past, we suspect that Tessa might be willing to forgive one cheating mistake in time, but the situation may not be that simple.

For one, now a third person has been thrown into the mix – Lindsay – and she’s someone who apparently knows both Tessa and Mariah. Plus, Lindsay is a prominent employee of Society, so she’s frequently going to be in Mariah’s orbit going forward. This cheating scandal will probably be a huge mess for the couple, assuming that they stay together or reconcile at some point.

But what if the situation gets even worse than that? Lindsay could decide that she’s not content just being a one-night stand of Mariah’s. Lindsay seems to really like Mariah, and she could decide to get in the mix and fight for an actual relationship with Mariah. Of course, Mariah would probably try to let her down gently in that situation, but Lindsay might insist that she’s not going anywhere.

Clearly, Lindsay was brought onto the Y&R scene for a reason. Could we be looking at a “fatal attraction” type of scenario with Lindsay, where she aggressively goes after Mariah and won’t give up, despite Mariah’s desire to work things out with Tessa? Could Tessa wind up in actual danger from Lindsay?

It could be as simple as Lindsay pressuring Mariah to be with her, or as horrifying as Lindsay going full-blown psycho on Mariah and Tessa. If that’s the case, then that could lead to a situation where either Mariah or Tessa (or both) wind up in grave danger from the likes of Lindsay.

We’ll see what happens here, but it certainly seems like something big is brewing on the Lindsay front. Do you think that Lindsay will snap and go the fatal attraction route in this scenario? Keep watching Y&R and stick with CDL for the latest Young and the Restless spoilers, updates, and news.

Relationships heat up and cool down this week on #YR! pic.twitter.com/6rTsDTgu6E