The Young and the Restless Spoilers: Michael Muhney Blasts TMZ For 2013 Story – Ex Adam Newman Demands Apology, Insists He Did Nothing Wrong 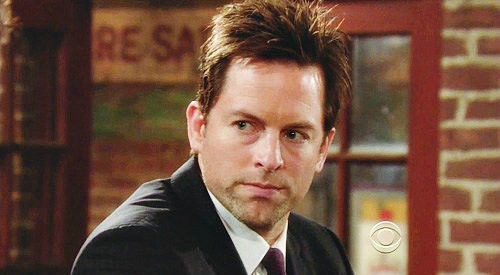 The Young and the Restless spoilers has some news to pass on about a popular ex-Y&R star. Michael Muhney, who portrayed Adam Newman on the CBS soap, has spoken out on social media in response to a Twitter user’s comment about his alleged inappropriate behavior on set back when he was working at Y&R. As you might know, Michael is quite active on Twitter and frequently comments on what’s going on in the world and about his past work on Y&R.

Michael is also very responsive with fans, and frequently tweets back in response to fan inquiries. Well, yesterday, a Twitter user wrote something that got Michael talking about the situation surrounding his departure from Y&R back in 2013.

Michael was let go from the soap, and at the time, TMZ claimed that the reason he was let go was due to “unwanted and unsolicited” advances toward his costar Hunter King, who plays Summer Newman on the show.

The Twitter user tweeted: “Oh, I forgot you were on Y&R, but were fired for inappropriate behavior against a female costar. Also, read about you in Eric’s book too!!” The Twitter user is referring to Eric Braeden, who portrays Victor Newman on Y&R and who also wrote a book back in 2017 called “I’ll Be Dammed: How My Young And Restless Life Led Me To America’s #1 Daytime Drama.”

Michael quickly replied to the tweet, replying the following: “Let’s address this once and for all. Actors who are written out of shows are ‘fired.’ I did nothing wrong except disagree a lot with one man. I have no accusers of inappropriate behavior. In this world of #metoo we need to believe the women. Yep. But none said anything about me.”

Then Michael tweeted again, this time specifically addressing the TMZ story. Michael tweeted: “And TMZ owes me the biggest apology ever. Back then there told my lawyers they could never be sued by anybody for anything as long as they used the words ‘allegedly.’ Shame on you TMZ. You are disgusting trash. Scum. Where’s my apology?”

And later, in response to another follower’s tweet in kind support of Michael, he responded saying: “I’m a good person with a clean conscience and a stellar reputation with my female costars.”

We should note that Michael has received plenty of fan support and well-wishes in response to his tweets. For example, one person commented: “You deserve more than an apology. You deserve respect and a whole lot of work, because you’re a good man and a damn good actor.” And someone else said: “An apology is the least you deserve!! There are many who should apologize to you!!!”

Finally, someone replied: “Just know that there are tons of fans that know the truth!!! You are a wonderful person and a wonderful actor, and you are deeply missed!! I truly believe you were part of a set up and the way you have been treated is just plain WRONG!”

Michael portrayed Adam Newman from 2009-2014, and after he was let go from the Young and the Restless, Justin Hartley took over the role of Adam, which he played from 2014-2015. The role is now played by Mark Grossman. Stay tuned to the CBS soap and don’t forget to keep CDL at the ready for all your Y&R spoilers, updates, and news.