BY Sean O'Brien on May 18, 2020 | Comments: Leave Comments
Related : COVID-19 NEWS, Soap Opera, Spoiler, Television, The Young and the Restless 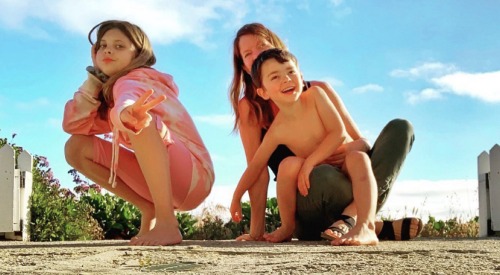 The Young and the Restless spoilers document that Michelle Stafford (Phyllis Summers) is enjoying outdoor fun time with her children while she’s off work due to the production shutdown that’s been caused by the COVID-19 virus pandemic response. The Y&R star posted a feel-good photo that includes her two children, Natalia and Jameson.

Stafford took to her Instagram account, where she has nearly two-hundred thousand followers. Aside of the upbeat spring photo she said, “Have the greatest week EVER!!!!!”

Like many entertainment celebrities and members of the public around the world, Stafford uses her social media account to post personal photos. In recent weeks she’s shared images of her parents and highlighted her mother on Mother’s Day.

Stafford has also uploaded a number of photos of her home and the activities that she’s been enjoying with her children during this extended period away from the Y&R set.

The actor’s mix of personal and career related pictures and videos allows followers to gain insight into her personal life and learn additional information about the soap opera that’s helped to define her career.

Young And The Restless Spoilers – Enduring Career Earned In Steps

Few people become so-called overnight sensations. Stafford was cast to play Phyllis, in what was originally intended to be a temporary role, four years after she had her first break in the business in 1990.

This tenured daytime performer earned Daytime Emmy Awards during her first two stints on the show. Her original run was from 1994 through 1997, with that final year also including her first Emmy award. She returned to the cast in 2000 and remained through 2013. Stafford earned her second Emmy in 2004.

The actor’s voluntary exit from General Hospital, where she was part of the cast from 2014-2019, enabled a return to Y&R.

Stafford’s iconic edition of Phyllis was seen in Las Vegas, Nevada, last June. Hardcore fans knew that meant the character would reverted to her original personality.

No matter, Stafford’s version of the character she made indelible will simply adjust and keep on scheming, believing that Nick Newman (Joshua Morrow) will choose to write her actions off as a personality quirk. Of course this implies that her pattern of personal disaster will follow as well.

Have the greatest week EVER!!!!!