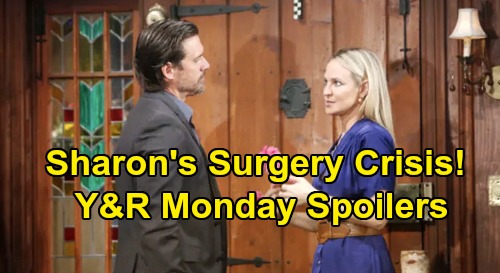 The Young and the Restless (Y&R) spoilers for Monday, April 20, tease that Nick Newman (Joshua Morrow) will get a special request. As Sharon Newman (Sharon Case) prepares for her surgery, something will be weighing on her. Nick would do anything to put Sharon’s mind at ease, so he’ll certainly step up here.

Sharon doesn’t like leaning on her loved ones most days, but she’s trying to find the right balance between maintaining her independence and seeking help when she needs it. On Monday, Sharon will indeed need Nick’s help.

It’s possible that’ll involve supporting Faith Newman (Alyvia Alyn Lind) somehow. Nick and Sharon are committed to getting Faith through this difficult ordeal. Sharon’s battle has taken a toll on Faith, so her mom may worry about how this next step will affect her.

Perhaps Sharon will even have instructions for Nick in case something goes wrong. There’s always a risk when it comes to a procedure like this, so Sharon may just want to be prepared for any outcome.

Of course, Sharon could also give Nick the task of filling in Adam Newman (Mark Grossman). Will Adam get updates on Sharon’s cancer before the surgery or after?

Regardless, Sharon made it clear that she doesn’t want to talk to Adam right now. Whether Sharon lets Nick handle it or just holds off, Sharon has to focus on staying calm and optimistic. There’s no need to drag Adam into her already drama-filled world at this point.

Other Young and the Restless spoilers say it’ll be a big day for Kyle Abbott (Michael Mealor) and Theo Vanderway (Tyler Johnson). They’ll plan to present their pitches to Jack Abbott (Peter Bergman), but Theo won’t know he’s falling right into a trap.

In reality, it’ll be Jack’s proposal from 15 years ago! Jack will be puzzled as he hears a rebranding strategy that’s awfully familiar. It won’t be long until Jack realizes Theo’s a thief, so that’ll end this presentation in a flash.

Within the next episode or two, Kyle will let Theo know he’s fired. You can bet Kyle will just love rubbing his victory in Theo’s face. At Society, Amanda Sinclair (Mishael Morgan) will be ready to work out some Chancellor Media details.

The Young and the Restless spoilers say Amanda will sit down with Lily Winters (Christel Khalil) and Billy Abbott (Jason Thompson) to hopefully reach an agreement.

It’ll cost Billy and Lily a pretty penny to lock in Amanda’s services, but a good lawyer is worth it – and Amanda’s the best. Her track record speaks for itself, so Lily and Billy need to pony up that cash.

However, The Young and the Restless spoilers hint that Lily and Amanda could clash soon. Will Amanda’s hefty price tag be a problem for Lily? We’ll keep you posted on all the latest Y&R news.

It’ll be interesting to see if this deal actually pans out! CDL’s your go-to source for sizzling Young and the Restless spoilers, updates and news.