BY Heather Hughes on February 21, 2020 | Comments: one comment
Related : Soap Opera, Spoiler, Television, The Young and the Restless 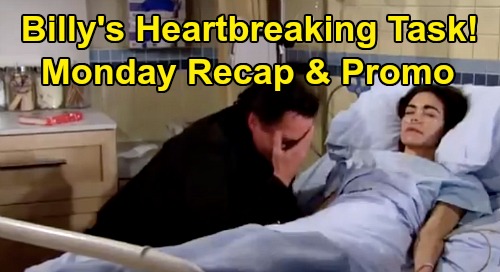 The Young and the Restless (Y&R) spoilers recap for Monday, February 24, teases that Billy Abbott (Jason Thompson) will remain distraught over Victoria Newman’s (Amelia Heinle) condition. At the Grand Phoenix, Billy will mull over a news report before calling Chelsea Lawson (Melissa Claire Egan). She won’t have any updates to pass along, but she’ll reiterate that Billy should avoid the hospital.

Over with Phyllis Summers (Michelle Stafford), she’ll reassure Summer Newman (Hunter King) about the situation over the phone. Phyllis will eventually join Billy to talk about Amanda Sinclair (Mishael Morgan), who’s holed up in her room and won’t open up.

Billy will confess that he spent the night on Amanda’s couch, but now he has to go where he’s needed most.

Other Young and the Restless spoilers say Chelsea and Adam Newman (Mark Grossman) will do some reflecting. At Society, they’ll talk about Victoria’s nightmare as well as their recent engagement. Adam will also admit to the divide he felt at the hospital; it was like he was set apart from his family.

When Adam contemplates reaching out and offering assistance, Chelsea will guess this is about Newman Enterprises. She won’t know if that’s a good idea since it could look like Adam’s being opportunistic. Although Adam will agree it could seem that way, he’ll also realize Victor Newman (Eric Braeden) will need to figure something out ASAP.

At the hospital, Nikki Newman (Melody Thomas Scott) will be on hand along with Victor, Jack Abbott (Peter Bergman) and Abby Newman (Melissa Ordway). Jack will feel confident Ripley Turner (Christian Keyes) is going to be apprehended.

Victor will start ranting about Billy, but Jack will try to put the focus back on the true culprit. Y&R spoilers say Abby will think that’s best, too.

After Victor announces that he has to deal with something and exits, Nikki will suspect he’s going to step up at Newman. She’ll shed some tears over this horrible ordeal. Nick Newman (Joshua Morrow) will also be present at the hospital, where he’ll take a call and ask how someone seemed. That someone will be Billy, so Nick will agree to let him visit the ranch and talk to the kids.

At home, Sharon Newman (Sharon Case) will catch up with Mariah Copeland (Camryn Grimes), who’ll be distraught over all the Victoria drama. Mariah will be thankful Sharon wasn’t injured and will feel Victoria has to fight like her mom. It’s important to hold onto the people you love.

Since Mariah’s so stressed, Sharon will think it’s time for her to come clean to Tessa Porter (Cait Fairbanks) about the cancer diagnosis. Mariah hasn’t done that yet since she feared Tessa might ditch the tour, but she’ll determine that Sharon’s right.

Afterward, Nick will call Sharon to fill her in on the visit he approved for Billy. Security will let Billy pass, but Nick will want Sharon to check in on things at the main house. Back at the hospital, Nick will talk to Noah Newman (Robert Adamson) about Sharon.

Although Noah will still want to stay for his mom’s sake, Nick will persuade him to return to London and come back when it’s time for Sharon’s surgery.

Noah will say his goodbyes to the Newman family as well as Mariah and Sharon. As for Billy, he’ll round up Johnny (Holden and Ryan Hare) to let them know Mommy got hurt and has to sleep now. Billy will hope they can all see Victoria soon. Once Sharon pops in, Johnny and Katie will scamper off to get ready for the stables. Sharon will try to give Billy some guidance, but he won’t be very receptive.

Over with Phyllis again, she’ll stop by the hospital with coffee and support. Nick will explain that Reed Hellstrom (Tristan Lake Leabu) has been called and is coming home. He’ll be thankful that Phyllis showed up when he needed her.

Later, Adam will return and share a private moment with Victor. He’ll want to know what he can do, so they’ll end up checking out some basketball stuff on Adam’s phone. It’ll serve as a nice distraction since that’s what Victor could really use.

Back at the Grand Phoenix, Abby will speak with Chelsea about Victoria and Billy. If Billy heads to the hospital when Victor’s there, Abby will think there’s going to be big trouble. She’ll bring up Billy’s “affair” with Amanda and insist she won’t forgive him if that’s what led to Victoria’s woes.

Chelsea will gather up her remaining belongings and apologize for leaving Abby to deal with Phyllis on her own. She’ll admit this hotel thing was never really her dream, but she’ll hope it’s Abby’s since Phyllis will fight to the death.

Other Y&R spoilers say Mariah will call Tessa while she sits at Society. She’ll be taken aback when Tanner Watts’ (Chase Coleman) answers instead and will wonder why he did.

Tanner will explain that Tessa’s in the shower, but he saw Mariah’s name on the screen and didn’t want her to get voicemail. He’ll warn that soundcheck is coming up, so Tessa may not be able to call back right away.

Mariah will be rattled, but she’ll assure Tanner that she understands. She’ll ask Tanner to let Tessa know she called, so he’ll promise to. Mariah will hang up and send Tessa a text saying she’s sorry she missed her. She’ll look pensive about the situation as she remains at the bar.