BY Heather Hughes on January 10, 2020 | Comments: one comment
Related : Soap Opera, Spoiler, Television, The Young and the Restless 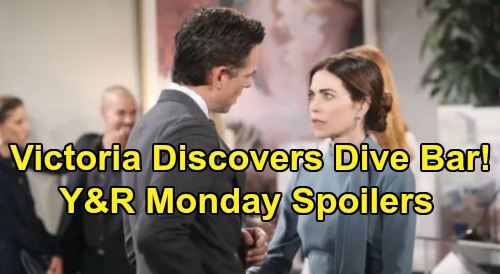 The Young and the Restless (Y&R) spoilers for Monday, January 13, tease that Sharon Newman (Sharon Case) will take another step toward the truth. In Friday’s Y&R episode, Sharon confirms her appointment for the following day. Since it should be a new day in Genoa City on Monday, that means Sharon likely will likely have her biopsy as planned.

Of course, that also means Sharon will be terrified as she awaits the results. Sadly, Sharon indeed has breast cancer and will have to decide how to tell her loved ones soon. That won’t be an easy conversation to have with any of them, but it’s definitely something Sharon will have to think about after this crushing news.

Sharon will also need to start thinking about a treatment plan. She’ll eventually get her oncologist’s advice and do everything she can to stick around for her family. Over with Victoria Newman (Amelia Heinle), she’ll stumble across a shocker that leaves her with questions.

Billy Abbott (Jason Thompson) will leave a receipt in his coat pocket, so Victoria will pull it out and notice it’s for that random little dive bar.

This place isn’t really on Victoria’s radar – and she didn’t think it was on Billy’s either. Victoria will begin to battle doubts about Billy and the secrets he’s keeping.

Victoria doesn’t really have the full picture of how Billy feels, but that’s only because he refuses to communicate – at least with her. Billy actually finds Amanda Sinclair (Mishael Morgan) quite easy to talk to.

The Young and the Restless spoilers say Victoria will ultimately decide to tackle the problem head-on. She’ll think she should just confront Billy and see why he never told her about this dive bar.

Victoria will push Billy to tell her the truth. She won’t like the walls Billy’s put up, but he may not know how to tear them down. As long as Victoria’s trying to fix and save Billy, he’s probably going to shut her out.

Unfortunately, Victoria will deliver an ultimatum that may make matters worse. It’s possible Billy will come clean about leaning on Amanda and leave Victoria with concerns about their relationship.

Whether Victoria wants Billy to ditch the dive bar, Amanda or both, you can bet Billy won’t like being controlled like this. Billy just wants to feel free and figure out a new path for himself – one where he isn’t judged for being broken.