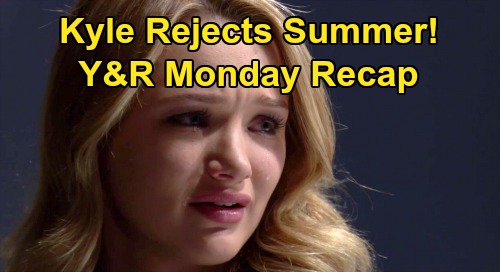 The Young and the Restless (Y&R) spoilers recap for Monday, January 27, teases that Theo Vanderway (Tyler Johnson) will push Lola Abbott (Sasha Calle) to talk to him. He’ll feel like Lola’s avoiding him because of what happened at the party recently, but she’ll blame it on being busy with work.

Theo will assure Lola he didn’t mean to cause problems. He won’t want to mess things up since Lola’s his only friend right now. Nearby, Mariah Copeland (Camryn Grimes) will glare over Theo making moves on Lola.

Abby Newman (Melissa Ordway) will worry about Mariah causing a scene. She’ll suggest that Mariah shouldn’t do whatever she’s thinking about doing, but Mariah has a different idea to discuss.

Y&R spoilers say Mariah will admit she’s been holed up without Tessa Porter (Cait Fairbanks) in town. She’ll want Abby to go out clubbing with her later, so Abby will get on board.

When Abby mentions maybe taking “Chance” Chancellor (Donny Boaz) to this club sometime, Mariah will contend that it’s not really his kind of place. The women there would also like Chance…but only as a friend.

Back with Theo, he’ll gush about how easy it is to be himself around Lola. After Lola heads back to the kitchen, Mariah won’t be able to contain her rage anymore.

She’ll stomp over to confront Theo about blatantly hitting on Kyle Abbott’s (Michael Mealor) wife. Mariah will make it clear that she’s got Kyle and Lola’s backs on this.

Theo will goad Mariah by suggesting that Tessa’s poised to become a big star. He’ll snark about it being hard to hold onto her girlfriend, but Mariah will get fed up with Theo and his annoying behavior. She’ll warn that if Theo makes trouble, she’ll return the favor.

Once Mariah returns to her table, Abby will talk about Chance and how Phyllis Summers (Michelle Stafford) might’ve derailed their recent date. She’ll note that Chance finds Phyllis entertaining and amusing, so she told him to go for it if he wants.

Mariah will be taken aback, but she’ll ultimately think that’s a smart decision. She’ll contend that Abby’s just letting the snake eat itself.

The conversation will shift to Tessa being on the road with her ex-husband, Tanner Watts (Chase Coleman). Mariah will note that they were only married for a few months. She’ll tell Abby she’s torn since she wants to hate super-rich Tanner for taking Tessa away, but she also appreciates the opportunity he’s given Tessa.

Once Mariah gets updates on Kyle and Summer Newman’s (Hunter King) trip, she’ll be uneasy about it. However, Mariah will determine that it’s not really her business.

Back with Lola and Theo, they’ll talk about the same trip. Lola will suggest she trusts Kyle, but Theo will wonder if Kyle trusts Lola. He’ll play up the angle of Kyle being entitled and contend that he doesn’t fit in that world.

In San Francisco, Summer and Kyle will be in a celebratory mood. Their business deal went well, so they’ll hit the mini bar and discuss their love lives. Kyle will admit he hasn’t texted Lola about their acquisition yet. He’ll get confirmation that Summer’s moved on from Theo and will be pleased about it.

After Kyle insists that Summer deserves better, Summer will admit she’s happy with her life as is. She’s not looking for someone to complete her. Summer will wonder if Kyle’s happy in his marriage.

Despite Kyle’s claim that he is, Summer will feel like his relationship with Lola progressed too fast. She’ll think Theo is a way of stirring up some passion and giving him something to fight for.

Summer will suggest that it’s been hard to watch Kyle try to change who he is for Lola. She’ll just want Kyle to be happy again. With that, Summer will lean in for a kiss…and Kyle will kiss back.

Moments later, Kyle will pull away and apologize for the misunderstanding. He’ll make it clear that he wants to work things out with Lola, but he values his friendship with Summer.

The Young and the Restless spoilers say Summer will feel stupid and start gathering her stuff. Kyle will promise Summer that everything’s fine, but she’ll leave humiliated.

Meanwhile, Billy Abbott (Jason Thompson) will meet up with Amanda Sinclair (Mishael Morgan) at the dive bar. He’ll be frustrated over Victoria Newman’s (Amelia Heinle) reaction to his thoughts and will admit he’s becoming resentful.

Amanda will feel at least somewhat to blame, but Billy won’t think so. He’ll remind Amanda that this is friendship, not an affair. Amanda won’t want to be the one Billy confides in any longer. She won’t want to help Billy cross a line in his marriage.

Amanda won’t think what they’re doing is healthy or going to last, so she’ll wish him luck and get the same wish from Billy. Nearby, someone will secretly take pictures of them together.

At home, Victoria will open up to Nick Newman (Joshua Morrow) about her Billy dilemma. She’ll get a hug and Nick’s advice on the situation. He’ll feel like Billy has to want to get the help.

Victoria will suggest that if Billy refuses that help, she’ll have no choice but to walk away. Of course, The Young and the Restless spoilers say Billy will be the one to break things off later in the week. We’ll keep you posted as other Y&R news comes in. Stay tuned to the CBS soap and don’t forget to check CDL often for the latest Young and the Restless spoilers, updates and news.

Make sure you don’t miss today’s episode of #YR! You can watch it here: https://t.co/Pi3NKiRHQp pic.twitter.com/5ymxFB6IsZ