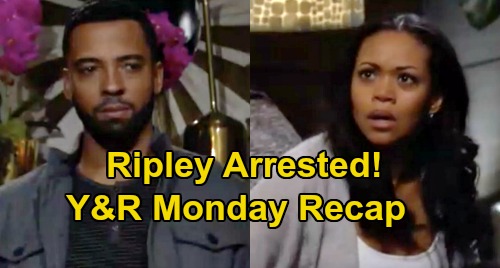 The Young and the Restless (Y&R) spoilers recap for Monday, March 2, teases that Victoria Newman (Amelia Heinle) will be surprised by how well everyone’s getting along. Nikki Newman (Melody Thomas Scott) will insist that the kids are being taken care of at the ranch. Billy Abbott’s (Jason Thompson) been visiting them and Sharon Newman (Sharon Case) has been popping by as well.

Next, Paul Williams (Doug Davidson) will find Victor Newman (Eric Braeden) to talk about Ripley Turner (Christian Keyes). They’ll head into Victoria’s room, where she’ll be brought up to speed on what led to the stabbing. Victoria will be shocked over Ripley thinking she was Amanda Sinclair (Mishael Morgan). She’ll learn that Billy showed up at the gala with Amanda before this all went down.

Victoria will want to stay at the ranch following her release and will add that she’s done with Billy. At Crimson Lights, Jack Abbott (Peter Bergman) will talk to Billy about Dina Mergeron’s (Marla Adams) decline. Billy will feel like Jack’s using the situation to encourage him to step up and become more reliable, but that’ll upset Jack. He wouldn’t use his mother’s situation to manipulate Billy.

After Billy offers an apology, he’ll give Jack some support. Y&R spoilers say Jack will eventually mention his plans to attend an AA meeting. Billy will think it’s his brother’s not-so-subtle attempt to guide him. Next, Jack will chat with Sharon Newman (Sharon Case) about Noah Newman’s (Robert Adamson) impressive work. Once Sharon gets a cramp in her hand, she’ll fill Jack in on her breast cancer.

Sharon will reveal that Nikki and Phyllis Summers (Michelle Stafford) are already in the loop. She’ll look forward to feuding with them again since it’ll mean she’s all right. After talk turns to Billy, Jack will confess that his brother’s isolation is a problem. Jack won’t think Billy’s doing well, but Sharon will reassure him. She’ll feel confident Jack can offer help if Billy finally decides to seek it.

At Jabot, Summer Newman (Hunter King) will feel great about where she stands both personally and professionally. She’ll speak with Kyle Abbott (Michael Mealor) about blurred lines now they’re an item, but she’ll think all of this feels right. Once Kyle shares the news of Dina’s decline, Summer will express sympathy. Kyle and Summer will also talk about Billy’s drama before parting ways.

In the corridor, Summer will bump into Theo Vanderway (Tyler Johnson). The Young and the Restless spoilers say they’ll take jabs at each other, but Summer will point out he’s at the office awfully late. She’ll guess that means Theo could’ve lock in plans with Lola Rosales (Sasha Calle), so he must be bitter about that.

As for Theo’s place at Jabot, he’ll intend to keep it and not just through his connection to Jack. Theo will hint that perhaps Kyle should be worried about him fighting back. In Amanda’s hotel suite, she’ll have a disturbing dream involving Ripley. Amanda will freak as Ripley appears in her room and will push him to leave. Ripley will counter that she already ruined his life, so what does he have to lose?

Amanda will keep begging Ripley to just go, but he’ll insist that’s not how this works. “You can’t just walk away.” Moments later, Amanda will awaken to a knock at the door. She’ll hear Rey Rosales (Jordi Vilasuso) calling from outside the door, so she’ll let him in.

The Young and the Restless spoilers say Rey will have some updates on Ripley, who was arrested on his way back to Genoa City with weapons in the car. Despite Amanda desire to confront Ripley, Rey won’t allow it since she’s a potential witness.

Next, Billy will arrive and hear about Ripley being in lockup. Amanda will rant about Ripley wanting her dead and coming back on a mission to kill her. She’ll pressure Billy to leave until he finally goes. Back with Sharon at the coffeehouse, she’ll be tired and emotional. Rey will be his usual supportive self and will suggest he can drive Sharon home.

At Society, Mariah Copeland (Camryn Grimes) will get advice from Lola Rosales (Sasha Calle) and Lindsay (Kirby Bliss Blanton) at the bar. She’ll admit Tessa isn’t texting back and doesn’t have a performance tonight. However, Mariah won’t think that means Tessa isn’t with Tanner. Lindsay will look thoughtful as Mariah describes Tanner’s history with Tessa and how they’re together all the time.

Once Lindsay’s alone with Mariah, she’ll suggest Mariah shouldn’t beat herself up for keeping things from Tessa – like the loss of her job. Mariah will want to head home, but Lindsay won’t think she should be alone. She’ll join Mariah at her humble abode, where Mariah will get weepy over her life that’s falling apart.

After Lindsay embraces Mariah, she’ll give her a quick peck. They’ll stare at each other for a moment between kissing passionately and stripping clothes off. After the deed’s done, Mariah will come out of the bathroom in a silky robe while Lindsay gets dressed again. When Mariah mentions that being unanticipated, Lindsay will suggest they can talk about it later and should just let it be for now.

Suddenly, Tessa will open the door and take in the scene on the couch. She’ll look hurt as she asks what’s going on here. It sounds like Mariah’s got some explaining to do, so stay tuned! We’ll keep you posted on all the latest Y&R details. Don’t forget to check CDL often for more Young and the Restless spoilers, updates and news.