The Young and the Restless Spoilers: New Couple Alert – Who Will Be Married During The Year 2021? 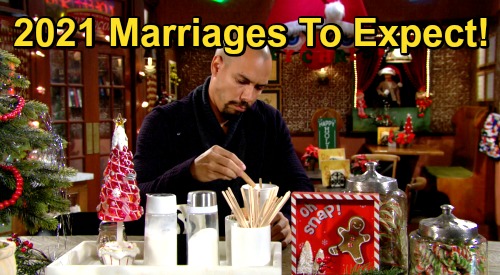 The Young and the Restless spoilers document that this is an upbeat projection toward the Christmas of 2021. Among all people in Genoa City, Wisconsin, which single people will be married (or remarried) by this time next year?

Yes, the downside of life is ridden by those sorry souls whose personality types insist that gloom and doom is all that exists. They are wrong, but happiness is still wished to those Adam Newman (Mark Grossman) types because their hearts can grow many sizes if they allow them too do so.

Love has uplifted the combined souls of forming and reforming couples. Plus, there are good people who haven’t found that special someone yet, but can.

Lola Rosales (Sasha Calle) ranks with the kindest souls in all of Wisconsin. Her first significant relationship led to marriage. But Kola didn’t last, which has left her alone this Christmas.

With Kyle Abbott’s (Michael Mealor) ring off her finger and Theo Vanderway (Tyler Johnson) not proving to be a fit and subsequently departing for Paris, France, Lola needs to be written in a new direction.

Here’s hoping that Y&R’s writing staff allows a currently available guy, a returning character, or a new man to be invented for her. If this happens early enough in the new year, there will be time for engagement and a marriage before next Christmas.

As an aside, Skyle will likely remarry soon. Kola fans and all who find Summer Newman (Hunter King) and Kyle’s latest rebound to be overly loud understand the brevity of the preceding sentence.

A past effort with Abby Newman (Melissa Ordway) didn’t work out. But a newer effort with Elena Dawson (Brytni Sarpy) has significant potential.

Nelena is Elena’s best option, regardless of whether she’s still pinning for Devon Hamilton (Devon Hamilton), who is her aggrieved party. Yet, a mistake can be overcome with sincere contrition, as Elena has offered, and a desire to create a better future, which she can choose to do.

Elena and Nate can be married by this time next year, but so can Devon and Amanda Sinclair (Mishael Morgan). Demanda feels destined as a re-imagining of the one-time Hevon.

Lane was one of Y&R’s main couples, during two different stints. But Cane Ashby (Daniel Goddard) went to find his father, Colin Atkinson (Tristan Rogers), who stole Devon’s inheritance, in the recent past. That matter was resolved, but Cane never came back, as Ashby was sadly written out of the show.

BiLily projects to marriage in the new year if Billy remains on a positive path. Of course there are a number of other people who could have reached the altar by this time next year as well.