The Young and the Restless Spoilers Next 2 Weeks: A Missing Husband and Cash – 3 Returns For Victor’s Multi-Episode Special Event 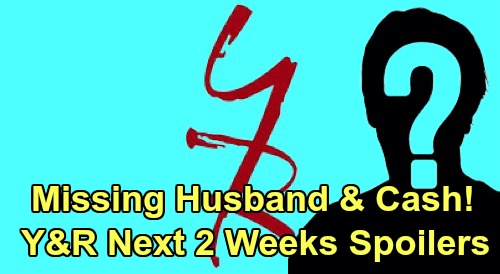 The Young and the Restless (Y&R) spoilers for the next two weeks tease that major drama’s on the way. During the week of February 10-14, Theo Vanderway (Tyler Johnson) will find out Summer Newman (Hunter King) and Kyle Abbott (Michael Mealor) made love.

It won’t be long until he takes that info to Lola Abbott (Sasha Calle), who’ll be fired up enough to push Theo against Society’s kitchen freezer and kiss him.

Lola will hint that she’d like a hookup as well, but Theo will turn down the chance for now. He’ll seem frustrated with himself for doing it, but he has to be smart about this. Waiting is better than rushing into bed with Lola and having her regret it.

Meanwhile, Sharon Newman (Sharon Case) will try to stay positive despite the terror of her first chemo treatment. Later, it looks like Sharon will start to battle some of the typical side effects. Sharon will have a hard time accepting that this is her new normal, but she’ll press on and prove she’s a fighter.

Next, Jack Abbott (Peter Bergman) will do his best to help Billy Abbott (Jason Thompson). He’ll have a plan that he probably thinks will help Billy regain control of his life, but it’s only going to feel like Jack’s controlling Billy. This plan of Jack’s won’t turn out well, so he’ll be back at square one.

Billy will turn his attention to Amanda Sinclair (Mishael Morgan) instead, who’ll appreciate more of Billy’s help. She’s dealing with a lot right now thanks to Ripley Turner’s (Christian Keyes) decision to appear in Genoa City.

Over with Adam Newman (Mark Grossman), he’ll head to Vegas to meet with Riza Thomas (Tina Casciani). What Adam won’t realize is that Chance Chancellor’s (Donny Boaz) coming, too.

Riza will be uneasy when Chance shows up out of the blue, but Adam will vouch for him. Once they’re all talking in Vegas, it’ll become apparent that Chance and Adam had a pretty close bond at one point. Of course, Adam had no memory and was living as Spider at the time.

During this meeting, a waitress will plant a listening device for Phyllis Summers (Michelle Stafford). It turns out Phyllis will hear all the dirt back at the Grand Phoenix, so she won’t even have to make the trip. The bug will do the hard work for her.

There’ll be talk about a woman – presumably the mystery woman who’s been off the grid and then back to ask questions. This woman will be curious about her missing husband and the cash he stashed.

Riza will fill Adam and Chance in on this woman, but there’s far more to the story. Phyllis will hear exactly what Chance and Adam have been trying to hide, so she’ll have quite the bomb in her hands.

During the week of February 17-21, Phyllis will work toward payback. That’ll probably come through the Vegas secret and whatever Phyllis has planned. You can bet it’ll involve some serious damage eventually.

Until then, Chelsea Lawson (Melissa Claire Egan) will be stunned by Adam’s bold move. Will that be something positive like a proposal or negative like a preemptive strike against Phyllis? Either way, Chelsea will be left reeling.

Other Young and the Restless spoilers say Jill Abbott (Jess Walton) will try to keep Billy’s mind occupied. She’ll give him a project to work on, but Billy may be more worried about Amanda. Y&R fans can expect some serious trouble for the cagey attorney, but she’ll try to climb out of it. Perhaps Billy will step up to pitch in again.

Other Young and the Restless spoilers say Nikki Newman (Melody Thomas Scott) will host an amazing gala. Everyone will be dressed to the nines at Top of the Tower. It’ll be a three-episode celebration to honor Newman Enterprises’ 50th anniversary, but it’ll mainly be about celebrating Eric Braeden’s (Victor Newman) 40 years on Y&R.

Noah Newman (Robert Adamson) will return just in time along with Victor’s first wife, Julia Newman (Meg Bennett). Victor’s brother, Matt Miller (Robert Parucha) will also be on hand, so it’ll be fun having some different characters back in the mix. This party will definitely come with some surprises, so stay tuned!

It sounds like some great episodes are coming up. We’ll give you updates as other Y&R news emerges. Stick with the CBS soap and don’t forget to check CDL often for the latest Young and the Restless spoilers, updates and news.