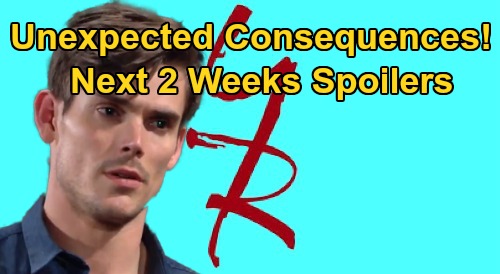 The Young and the Restless (Y&R) spoilers for the next two weeks tease that some surprises are in store. During the week of April 6-10, Victoria Newman (Amelia Heinle) will fume over Adam Newman’s (Mark Grossman) power play. Adam has proof that Victor Newman (Eric Braeden) killed AJ Montalvo and swept it under the rug, so Victor will let Adam have his way.

Adam will indeed take over Newman Enterprises, which will force Victoria out of the job she fought hard for. Although Victor appears to have a plan or ulterior motive, that doesn’t mean Victoria will stand by and do nothing.

Victoria will go along with Victor’s wishes initially, but she’ll cook up something on the side later. The Young and the Restless spoilers say Victoria will crave a good dose of revenge!

Of course, Victoria may choose to be sneaky about her vengeful strategy. She won’t want to risk sending Victor to prison, but she’ll indeed hope to strike back.

Over with Phyllis Summers (Michelle Stafford), she’ll pump the brakes on Abby Newman’s (Melissa Ordway) latest project. It sounds like Phyllis will manage to derail that rival hotel Abby has in mind, so Abby’s bound to explode!

At Jabot, Jack Abbott (Peter Bergman) will hand down punishments after Theo Vanderway (Tyler Johnson) spars with Kyle Abbott (Michael Mealor). Since their constant clashing will upset Dina Mergeron (Marla Adams), Jack will think they both deserve some tough love. Kyle and Theo will just have to accept whatever Jack dishes out!

Over with Sharon Newman (Sharon Case), she’ll tearfully tell Mariah Copeland (Camryn Grimes) and Faith Newman (Alyvia Alyn Lind) about her disheartening scan results. Sharon will admit this means her surgery will have to happen sooner and may be more invasive.

After Tessa Porter (Cait Fairbanks) returns home from her tour, she’ll have a heart-to-heart with Sharon at the cottage. Sharon will thank Tessa for forgiving Mariah and will express concern over her cancer outcome.

Since Sharon can’t guarantee she’ll survive, she’ll suggest it means everything for Mariah to have Tessa to love her. Tessa assure Sharon that she can check that fear off her list.

Later, Mariah and Tessa will enjoy hanging out at Crimson Lights. Although Mariah will remain worried about Sharon, having Tessa home again will help. It’ll be nice for them to do something normal since things haven’t been very normal for Mariah in quite some time.

Back with the Newmans, Nick Newman (Joshua Morrow) will blow his top over Adam’s vicious blackmail. Nikki Newman (Melody Thomas Scott) will step up and try to play peacemaker, but it’s doubtful it’ll do much good.

Y&R spoilers say Nikki will also grill Victor about what’s really going on here. Will Victor tell Nikki a different version of events than the one Adam offered?

Regardless, an ultimatum will be delivered during the week of April 13-17. Victor will lay down the law with someone, so we can assume that’ll be Adam. It sounds like Adam will have the choice of backing off or facing the consequences. Unfortunately, Adam will choose the consequences – and they’re sure to be life-shattering.

Other Young and the Restless spoilers say Billy Abbott (Jason Thompson) will score the start of a hot scoop. After uncovering an intriguing lead, Billy will decide to chase it.

Billy may be on the verge of a sizzling story, so this could easily tie in with Adam’s story – which he vowed to bury if he got what he wanted. If Billy digs too deep, there could be major trouble for Victor and the rest of the Newman clan.

Next, Nate Hastings (Sean Dominic) and Amanda Sinclair (Mishael Morgan) will strengthen their bond. Their romance will become meaningful rather quickly, so we’ll see how long it takes them to land in bed together.

In the meantime, Jack will mull over a baffling discovery. He’ll find out something that leaves him confused, so that’ll be a mystery for Jack to tackle.

As other Y&R news becomes available, we’ll have all the hottest updates. The next two weeks are sure to bring some fantastic episodes. Don’t forget to check out CDL frequently for exciting Young and the Restless spoilers, updates and news.