The Young and the Restless Spoilers: Nikki Tells Victor Shocking News – What If Nick Is Paul’s Son?

BY Sean O'Brien on May 28, 2020 | Comments: Leave Comments
Related : Soap Opera, Spoiler, Television, The Young and the Restless 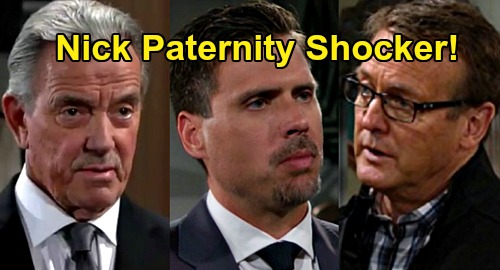 The Young and the Restless spoilers document that Nikki Newman’s (Melody Thomas Scott) initial connection with Paul Williams (Doug Davidson) led to the eventual reveal that Dylan McAvoy (Steve Burton) was their son. The enhancement of that part of Y&R’s history also opened the door to future paternal adjustments.

Young And The Restless Spoilers – Suspicion Not Confirmed Until Now?

It’s not that Nikki must be written into a dark corner, where a secret is exposed, or discovered. Y&R could create a storyline where Nikki never confirmed her suspicion that Paul might be Nick’s son, or that she simply blocked out that potential.

Victor has clearly proven to be the deepest and truest love of Nikki’s life. So it’s reasonable to believe that she thought it best not to explore paternity matters when Nick was born in the late 1980’s.

In this scenario Paul’s curiosity about Nick’s paternity would need to be explained in a way that believably answers whatever questions he would have had at the time.

Young And The Restless Spoilers – Truth Withheld For Decades?

Alternatively, Nikki could be revealed as having pursued a paternity test through to a conclusion. Her awareness of Nick’s actual father would have been intentionally buried in order to sustain a past version of Niktor at that point in storyline time.

Paul’s awareness of the matter could go in either direction. It would seem more plausible to believe that he wasn’t informed, as that would make Nikki the sole owner of the secret.

The rancor between Victor and Nick has been fierce through the decades. Many, including both men, chalked that up to their biological connection. The suggested backstory change would forever nix that bloodline theory.

The hot-headed nature of both men’s personalities would surely come into play. But Nick might also feel compassion for Victor in knowing that he cared for him as a son when he was never that.

Victor’s response to Nikki would be exceedingly dramatic, with a mix of rage and sorrow providing Braeden and Thomas Scott an opportunity to deliver additional collaboratively great work.