The Young and the Restless Spoilers: Phyllis Arrested For Attempted Murder of Paul and Christine On New Y&R Episodes? 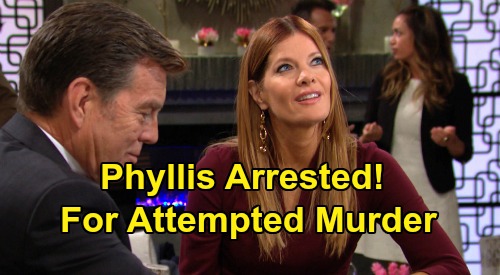 The Young and the Restless spoilers document that Paul Williams (Doug Davidson) and Christine Blair (Lauralee Bell) were set to marry in late 1994. But Phyllis Summers’ (Michelle Stafford) obsession with the Bug, which was her nickname for Bell’s character, who was also known as Cricket, led to a terrible, still unpunished crime being committed.

Viewers saw that an unknown driver (who was later revealed as Phyllis) hit Paul and Chris after they’d exited Newman Towers. Hardcore fans know that Stafford’s character later acknowledged her act, but that Phyllis has never faced justice.

Young And The Restless Spoilers – Danny Romalotti Fixation Cause Of Distress

Stafford’s 1994 arrival on Y&R was supposed to be a temporary role. But the actor hit her mark so hard that she earned a regular contract and drove Phyllis into legacy character status.

Phyllis glommed onto Danny while he was on tour. She followed him to Genoa City, Wisconsin, and learned that Chris was the love of his love. That established Phyllis’ bitter enemy status with Chris. In real life, Stafford and Bell are good friends. 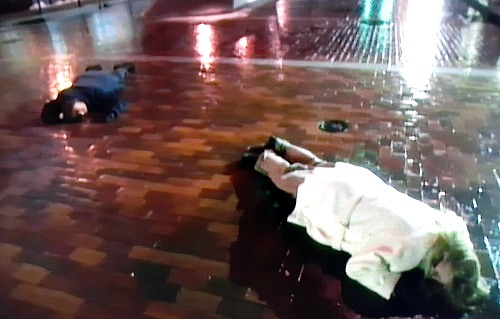 Davidson and Bell participated in an Instagram Live chat where they interacted with fans while the famous hit-and-run episode was playing. During the internet session the actors said that they were actually in Pittsburgh, Pennsylvania, on a location shoot for the exterior shot, as a wintertime setting was needed.

One of the outcomes of the production shutdown is that fans have been able to connect with the stars of this show in ways that never would have been possible otherwise. As a result much background knowledge has been gained through social media posts and various live events that they are participating in.

Young And The Restless Spoilers – Will Phyllis Summers Be Proven Guilty?

Phyllis has never faced any jail time for her crime in the twenty-five plus years that have passed since that nearly deadly December night. Y&R wrote scenes in recent years where Christine laid into Phyllis for having escaped punishment, but that was about the extent of Phyllis’ consequences.

While Paul seems to have accepted what Phyllis did to Pristine, he’s still the Chief of Police. So, if some evidence emerges, or she’s caught admitting to the crime, then it’s likely that Davidson’s character would need Rey Rosales’ (Jordi Vilasuso) help, as Paul would have a direct conflict of interest.

Whether Phyllis is subsequently proven guilty would be a compelling part of the proposed storyline that’s extended for more than a quarter-century.