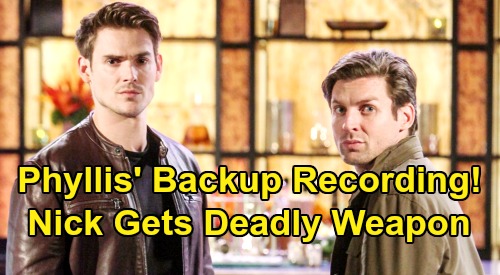 The Young and the Restless (Y&R) spoilers tease that Phyllis Summers (Michelle Stafford) may have a few tricks up her sleeve – and they just might help Nick Newman (Joshua Morrow)! Y&R fans will recall that Phyllis was determined to find out Adam Newman’s (Mark Grossman) big Vegas secret. Phyllis hit the jackpot once she scored an incriminating recording of the deadly events that went down.

However, that recording could’ve gotten Chance Chancellor (Donny Boaz) in big trouble as well, so Abby Newman (Melissa Ordway) stepped up to help him get rid of the evidence. After stealing Phyllis’ thumb drive, Abby fried Phyllis’ laptop and hoped that was the end of it.

Once Phyllis returned to her room and fumed over the burglary and damage, she immediately suspected the scheming duo and insisted this wasn’t over. Phyllis said, “Oh, you think you’ve won. Oh, you think again.” Later, Phyllis gloated to Abby about having another copy and hinted that nothing was safer than a safe deposit box.

Of course, Y&R viewers know Phyllis is a pro when it comes to plotting. Why on earth would Phyllis tip Abby off to the real location of her only remaining recording? Phyllis is smarter than that!

Perhaps Abby and Chance did exactly what Phyllis expected them to do when they gained access to that safe deposit box. Maybe Phyllis wanted them to get rid of the recording and assume that was that.

If so, it worked out pretty well for Phyllis. She got the schemers off her back and can sit on this secret for as long as she wants. Chance and Abby aren’t breathing down Phyllis’ neck about it, but Phyllis potentially still has something she can use to her advantage.

As Chance mentioned at one point, all Phyllis would’ve gotten out of revealing the secret at the time was sadistic satisfaction. Chance suspected Phyllis wouldn’t expose it unless she had a stronger motive to do so.

That motive might come into play now that Phyllis has reunited with Nick. Helping her boyfriend take down Adam would likely be enough to make Phyllis pull the trigger on this.

Adam is blackmailing Victor over a murder, so it’s only fair that his own deadly secret come back to bite him. The Young and the Restless spoilers say Nick will be livid once he gets updates on Adam’s blackmail plot.

After Adam steals the throne away from Victoria Newman (Amelia Heinle), Nick will really be fuming. Their sister’s already been through a nightmare, so this is the last thing Victoria needs.

Naturally, Nick will also worry about Adam possibly sending Victor to prison. Phyllis is bound to hear the news and could offer up that Vegas leverage. Although Phyllis hates Victor, she loves Nick more. Phyllis has also been hoping for the perfect moment to take Adam down – so here it is!

Does Phyllis have another copy of the incriminating recording? Will Phyllis give it to Nick? Adam might cause his own takedown thanks to his risky Victor blackmail plot.