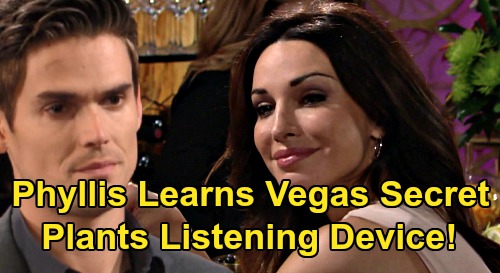 The Young and the Restless (Y&R) spoilers tease that Phyllis Summers (Michelle Stafford) will finally score the leverage she needs. The whole point of sniffing around Chance Chancellor (Donny Boaz) was to figure out exactly what went down in Vegas.

Phyllis doesn’t have the details, but she knows it involves Adam Newman (Mark Grossman) and that it had to have been pretty horrible.

Although Chance chose Abby Newman (Melissa Ordway), Phyllis won’t let that stop her from pursuing this secret. Once Phyllis gets an idea in her head, she often can’t shake it.

That’ll certainly be the case this time as Phyllis gets a clue and makes a fateful decision. Y&R spoilers say Phyllis will learn Adam is headed to Vegas, so she’ll decide she’d better follow him and get to the bottom of this mess.

Once Chance realizes Adam it headed back to Sin City, he’ll want to be there as well. Despite the help Adam’s provided, Chance just doesn’t seem to think Adam has a good grip on the situation.

While in Vegas, Chance and Adam will have a meeting with Riza Thomas (Tina Casciani). She may be the mystery woman that Adam and Chance have been whispering about lately.

Regardless, Phyllis will view this meeting as a golden opportunity – one she doesn’t intend to let pass her by. The Young and the Restless spoilers say Phyllis will come prepared, so she’ll manage to bug the area where this meeting goes down.

Phyllis will plant a listening device so she can eavesdrop on everything that’s said, which will lead to the secret landing in her hands.

There’s no word on exactly what the secret is just yet, but Phyllis will realize it’s a doozy! Of course, The Young and the Restless fans may wonder why Phyllis has worked so hard to score this secret.

The answer is simple: power and revenge. Phyllis will be holding all the cards, so she’ll think she’s got it made at this point. She’ll look forward to inflicting misery with her vengeance schemes to come.