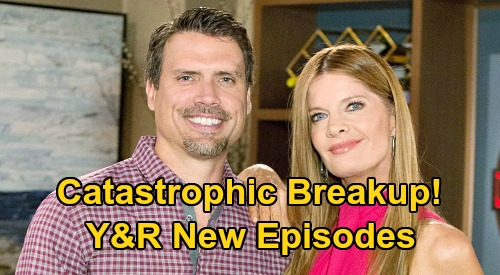 The Young and the Restless (Y&R) spoilers tease that Phyllis Summers (Michelle Stafford) may be her own worst enemy in new Y&R episodes. Phyllis has always been a schemer, which is a problem since she’s trying to date a guy like Nick Newman (Joshua Morrow). Nick’s certainly made his fair share of mistakes over the years, but he’s got a good heart and believes Phyllis has a good heart, too.

That may be true, but Phyllis consistently finds ways to stir up trouble. The Young and the Restless fans know Phyllis is capable of love – as we’ve seen with Nick and in her relationship with her daughter, Summer Newman (Hunter King).

However, Phyllis tends to play dirty and pick fights. That’s no big deal when Phyllis is single, but she may not get by with it for long while dating Nick.

Since Phyllis has proven she can’t stop scheming, will she ultimately push Nick too far? It seems likely if history is any indication. That’s especially true since Phyllis has a feud with Nick’s sister, Abby Newman (Melissa Ordway).

The Young and the Restless spoilers point to a sneaky plan when Y&R returns with new episodes. Phyllis got an idea involving bones after her chat with Jack Abbott (Peter Bergman), so whatever she’s cooking up could provoke Nick’s fury – particularly if it hurts Abby. It sounds like Phyllis could be headed for another downfall.

When you combine that with all the safety protocols on set now, Y&R may be eager to split “Phick” up – or at least create some tension between them. Living Nick and Phyllis a reason to keep their distance would make sense under the circumstances.

Of course, it’s possible Y&R will use stand-ins or mannequins to keep “Phick’s” love alive for a while longer, but Nick and Phyllis are bound to implode eventually. This reunion is a disaster waiting to happen, so stay tuned. We’ll deliver updates as other Y&R news pops up.