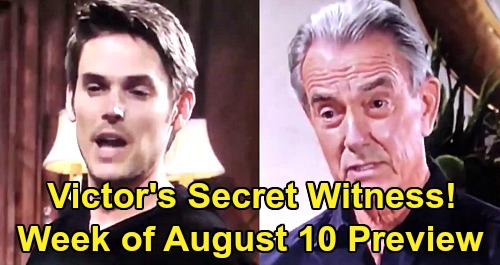 The Young and the Restless (Y&R) spoilers preview for the week of August 10-14 teases that some shocking moments are coming up in Genoa City. Y&R’s finally back with new episodes – and a hot preview video shows off a few looming bombshells. Let’s talk about what’s in store as the action picks back up in GC.

Jack will admit Dina’s been emotional and agitated before he offers an intriguing clue. After Jack shares how Dina turned to him and said “Bixley,” Ashley will ask what that means. Jack won’t know either, but he’ll resolve to find out!

Is Bixley a person or perhaps a place? Regardless, Y&R spoilers say this will serve as the starting point for a new Abbott family mystery. Jack and Traci Abbott (Beth Maitland) will follow a trail that leads to a memento – one that’s important to Dina and signifies a milestone in her early romance with John Abbott (Jerry Douglas).

Next, Amanda Sinclair (Mishael Morgan) will surprise Nate Hastings (Sean Dominic) when she drops by the clinic. Nate will wonder what Amanda’s doing there, so she’ll suggest a friend helped her see that there’s more to life than work. Amanda will get confirmation that it’s a good surprise, so things will seemingly be going well for these two.

Unfortunately, Amanda will wind up pumping the brakes on this blooming love story. This definitely seems like it’ll be a case of mixed signals, so Nate’s sure to be confused!

Meanwhile, Victoria Newman (Amelia Heinle) will stop by Chancellor Communications. Billy Abbott (Jason Thompson) will assume Victoria’s there because of the story she told him, but she’ll insist the story has changed.

Once Billy admits Victoria has his full attention, she’ll tell him to close the door. Victoria and Billy seem poised to blow up quite a scandal for Adam Newman (Mark Grossman).

Adam killed AJ Montalvo as a kid, blocked it out, accused Victor Newman (Eric Braeden) of murder and blackmailed him with misleading proof. If that’s not a scandal that’ll sell, then what is?!

Other Young and the Restless spoilers say Chelsea Lawson (Melissa Claire Egan) will confront Victor about his claims. Chelsea will angrily ask if Victor actually expects her to believe Adam killed AJ Montalvo when he was 11 years old. Victor will somberly remind Chelsea that she wanted the truth – and that’s the truth.

Chelsea will eventually point out that even if Victor’s right, he has no one to corroborate his story. That’s where Chelsea’s wrong according to Victor. It sounds like Victor will reveal a secret witness to Chelsea and make her realize this could add up to trouble.

That grim night in Kansas will make serious waves in the weeks ahead!

Finally, Adam will catch Sharon Newman (Sharon Case) off guard when he shows up to see her. Sharon will ask what Adam’s doing there – presumably fearing someone spilled the breast cancer beans.

However, Adam will insist he needs Sharon’s help. This might be about getting to the bottom of Adam’s blocked trauma. Adam may not fully believe it’s there, but he needs to find out either way.

The Bold and the Beautiful Spoilers: Thomas Falls for Flo, Next Blonde Logan – Wyatt Loses Again?