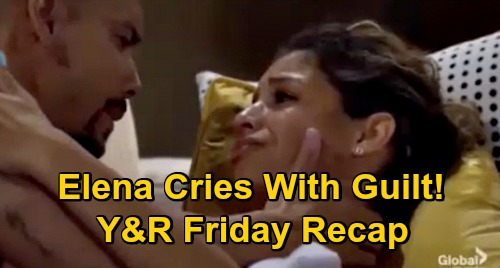 The Young and the Restless spoilers recap for Friday, October 9, tease that Victor Newman (Eric Braeden) will stand looking at Billy Abbott (Jason Thompson) at Society, but Billy will get a call and step away, so Victor will sit down with Lily Winters (Christel Khalil).

The conversation will start out friendly enough, but Victor will start to berate Billy to Lily, and he’ll urge Lily to let Billy go from Chancellor Communications.

Victor will insinuate that he’ll be able to right the wrong, meaning that he wants to take back the Newman Media Division from Chancellor Communications.

After Victor leaves, Billy will rejoin Lily, and he’ll learn about Victor’s words to Lily. Billy will thank Lily for sticking up for him. Lily will say that she understands, given that she made a mess of her life as well after the accident that took Hilary Hamilton’s (Mishael Morgan) life.

Lily will say that she’s rebuilding her life as well, and that they’re both works in progress.

At Crimson Lights, Nate Hastings (Sean Dominic) will flash back to his tryst with Elena Dawson (Brytni Sarpy) at the clinic. Amanda Sinclair (Mishael Morgan) will arrive, wondering why Nate has been ghosting her, and Nate will offer some lame excuses.

Amanda will suggest that they have dinner tonight, but Nate will politely decline, saying that he will make it up to her.

Over at the Grand Phoenix, Phyllis Summers (Michelle Stafford) will talk with her finance person via phone, who will suggest that she use her relationship with Nick Newman (Joshua Morrow) to her advantage with Victoria Newman (Amelia Heinle).

Nick will arrive and sense that something’s wrong with Phyllis, but Phyllis will only say that it involves Victoria.

Later, in the lobby of the hotel, Phyllis will ask Amanda to help her fight Victoria in her capacity as a lawyer. Amanda will be flattered, but she’ll be unable to do it because of her contract with Chancellor Communications.

Amanda will offer Phyllis some advice about going up against Victoria – specifically, that she should consider whether it would damage her relationship with Nick.

At Devon Hamilton’s (Bryton James) penthouse, Elena will seem distracted, and Devon will think that she’s upset about what happened with her patient the other night at the clinic.

Then Devon will worry that Elena is upset about him spending time with Amanda, and Elena will say that Devon “deserves better” and that she’s not proud of how she’s handled things. Devon will take a call, and Elena will clearly be struggling with whether to tell Devon about her tryst with Nate.

Over at Newman Enterprises, Nick will arrive to see Victoria, waiting her side of the story. He’ll goad Victoria into telling him all about how she bought Phyllis’ hotel debt. Nick will be peeved that Victoria is acting just like Adam would, and he’ll tell his sister as much.

Then Nick will blast Victoria for her shifting loyalties when it comes to the family, and he’ll grump about how Faith Newman (Alyvia Alyn Lind) is suffering because of the exposé. Ultimately Nick will walk out in a huff.

Later, Victor will arrive to see Victoria and wanting to make peace. Victoria will balk, saying that Victor just wants a chance to control her again and that he wants to go back to the way things were before.

Victor will go on, saying that Victoria could redeem herself by showing Billy who she is, and Victoria will fire back that she’s not the one who needs redemption – Adam is. Victoria will storm off, leaving Victor to show himself out.

Back at Crimson Lights, Nate will see Nick, and they’ll talk briefly about the Adam exposé, and about how both Nick and Nate have been working too hard. Nate will think that it must be difficult for Nick knowing the damage done by his own brother.

Nick will say that some betrayals are beyond the pale. That will strike a chord with Nate.

Nick will head back to the Grand Phoenix to see Phyllis, and he’ll disclose that he learned the whole story about Victoria’s hostile takeover. Phyllis won’t be mad, and she and Nick will head off to play pool. Shortly after, Billy and Lily will walk in and say their goodnights for the evening.

Back at Devon’s penthouse, Elena and Devon will talk about what to do for dinner, and while Devon is in the kitchen, Nate will text Elena wondering how she’s doing.

Elena will get back that she can’t keep doing this and that it isn’t fair to Devon. Nate will respond that Elena shouldn’t do anything until they talk.

Devon will return and notice again that Elena is very distracted about something. Devon will suggest that they go to the lake tomorrow, but Elena will say that she’s working at the clinic.

Elena will suggest that they make the best of the time they have right now, and they’ll make love as Elena cries. Devon will notice, and he’ll ask if Elena’s ok. Elena will tell Devon that she wishes she could stop time and that she loves him.

It sounds like a lot of Y&R drama is heating up for Friday’s episode, so stay tuned! Stick with the CBS soap, and don’t forget to check CDL frequently for the latest Young and the Restless spoilers, updates, and news. We’re you’re go-to source for all the soaps!