The Young and the Restless Spoilers Recap: Monday, October 5 – Elena & Nate Keep Secret – Sharon Asks Rey To Move Back In – Chloe In Labor 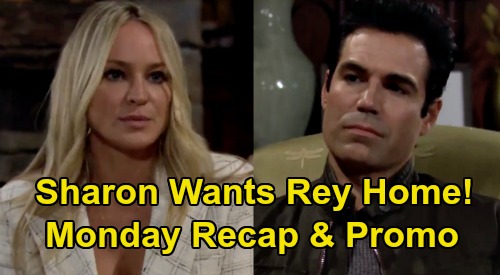 The Young and the Restless spoilers recap for Monday, October 5, tease that the action will kick off with some steamy scenes between Nate Hastings (Sean Dominic) and Elena Dawson (Brytni Sarpy) at the New Hope Clinic.

After making love, Elena will immediately be upset, and she and Nate will chalk up the experience to running on adrenaline after Jared’s (Michael Maclane) overdose. Both Nate and Elena will be rattled, and they’ll make a pact to never speak of this again.

Elena will leave as Nick Newman (Joshua Morrow) arrives to drop off some supplies, and Nick will wonder what’s going on. Nate will cover, saying that they had a hard night at the clinic with a patient who overdosed.

Nick will invite Nate out for drinks, but Nate will refuse, saying that he needs time alone to decompress.

As they talk and laugh, Devon will note how different Hilary and Amanda are, and Devon and Amanda will decide that they are family as well as friends.

At Devon’s penthouse, Elena will return while Devon is out with Amanda. Elena will be tortured with guilt, and later Devon will return and immediately notice that something’s off with Elena.

Elena will cover, saying that she had a rough night, and she’ll feel guilty as Devon praises her teamwork with Nate.

Elena will then learn that Devon was with Amanda tonight, and she’ll snip at Devon over it. Devon will reassure Elena that he loves her and loves their life together.

That will make Elena feel more guilty, and she’ll nearly tell Devon what happened with Nate, but she’ll catch herself and keep the truth from him, saying that she had a rough night. Elena will head up to bed, clearly in agony over what she and Nate did.

At the Chancellor mansion, Chloe Mitchell (Elizabeth Hendrickson) and Kevin Fisher (Greg Rikaart) will have a cute conversation about being ready for their baby boy to arrive.

Kevin will talk to the baby, telling him that he needs to come and meet his amazing mom. Later, Chloe and Esther Valentine (Kate Linder) will talk, and Ether will recall Chloe’s birth right there on the stairs in the mansion with only Katherine Chancellor (Jeanne Cooper) present.

A short while later, Esther and Kevin will be chatting in the living room when Chloe yells from upstairs – the baby will be on the way! Chloe and Kevin will hurriedly leave for the hospital, while Esther stays behind and gazes up at Katherine’ portrait. “Oh, Mrs. C,” Esther will say.

At Crimson Lights, Mariah Copeland (Camryn Grimes) will talk with Faith Newman (Alyvia Alyn Lind), who’s trying to be strong and stoic. Faith will be upset about her internet bullying, and Mariah will try to give her advice, but Faith won’t seem receptive, and she’ll even refuse her favorite brownies.

Nick will eventually arrive and talk with Faith, who will insist that she’s fine. Nick will say that Faith never should have been in that article about Adam Newman (Mark Grossman), and Faith won’t understand why people don’t cut Adam out of their lives for what he’s done.

After talking about Sharon’s surgery and their hope that they’ll get all the cancer this time, Faith and Nick will take off.

At Sharon’s place, she and Rey Rosales (Jordi Vilasuso) will prepare for her surgery tomorrow. Rey will sense that Sharon wants to ask him something, and Sharon will ask Rey to move back in with her.

Sharon will worry that perhaps Rey doesn’t want to, and she’ll ramble until Rey says that he’d love to move back in, and his list all the wonderful reasons why he wants to.

When Rey steps out of the room, Sharon will be overcome with emotion, and she’ll start crying. Faith will walk up to the front door from the outside and see her mom breaking down, and she’ll run off.

Finally, at Society, Nate will drink alone, and he’ll ignore several calls from Amanda, who will be sitting by herself at the Grand Phoenix bar.

It sounds like a lot of Y&R drama is heating up for Monday’s episode, so don’t miss it! We’ll be sure to give you updates as Y&R news comes in throughout the weekend. Stick with the CBS soap and remember to keep CDL bookmarked for all the latest Young and the Restless spoilers, updates, and news.

Next week on #YR, Elena is consumed with guilt, Chloe goes into labor, Sharon asks Rey to move back in, and Chelsea needs help. pic.twitter.com/HeQQnFSpoz