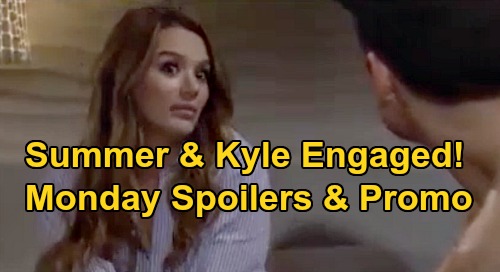 The Young and the Restless spoilers recap for Monday, September 14, tease that Adam Newman (Mark Grossman) and Chelsea Lawson (Melissa Claire Egan) will continue their conversation at the penthouse. Adam will insist that he and Chelsea can’t be together, but Chelsea will continue to fight him on it.

Adam will say that because of what he is, Chelsea will leave him eventually, so it’s inevitable that they can’t be together. Adam will leave, with Chelsea telling him that she won’t lose him again.

Meanwhile, Sharon Newman (Sharon Case) will wake up from a dream about Adam that almost turns romantic. Sharon will text Adam, but he’ll be at the front door.

Sharon will tell Adam that she told Rey Rosales (Jordi Vilasuso) about going to see him, and she’ll say that she’s going to try to fix things with Rey and that she can’t treat Adam anymore. Adam will understand, saying that Sharon needs to focus on getting healthy.

Sharon will urge Adam to reach out to another therapist, but Adam will say that he knows what he needs to do, and that he’s going to find his own way out of this. “Don’t worry about me, just take care of yourself,” Adam will say. Adam will go, and Sharon will stand at the door and watch him leave sadly.

At the Grand Phoenix, Kyle Abbott (Michael Mealor) will return to the suite he shares with Summer Newman (Hunter King) from his business trip. Summer will be waiting for him with a romantic dinner and wearing one of his shirts.

After making love, talk will turn to their new home construction. Kyle and Summer will discuss how many dogs they want, and maybe having kids someday.

Kyle will then note that they skipped over the part where they get married. Summer will beam as Kyle says that he feels like they’re engaged already. Summer will say that maybe in their hearts they’re already engaged.

Together, Summer and Kyle will decide that they’re secretly engaged, and that it will be just their secret for the time being. Kyle will give Summer a makeshift ring, and Summer will say that it’s perfect.

At Crimson Lights, Jack Abbott (Peter Bergman) and Billy Abbott (Jason Thompson) will meet for coffee, and they’ll see Nikki Newman (Melody Thomas Scott) and Victoria Newman (Amelia Heinle) there for the same thing. Nikki will decline Jack’s offer to sit together, as Nikki will want some alone time with Victoria.

Nikki and Victoria will settle on the porch, where Victoria will reveal that she didn’t go to the Grand Phoenix Escape Club. Nikki will want to talk about Victor Newman (Eric Braeden) and how he’s regretting how he handled things with Adam back in Kansas.

Nikki will explain that Alyssa Montalvo (Maria DiDomenico) is back, that that it’s been hard on Victor. Victoria won’t sympathize, and she’ll say that Victor is suffering the consequences of his own actions.

Victoria will go on to say that Victor doesn’t seem to regret how he’s treated her in the past few months, yet he’s all worried about Adam. “I’m done with him,” Victoria will say.

Nikki will have had enough, and she’ll sternly tell her daughter that you have to fight for family because it doesn’t last forever. Nikki will leave upset.

Meanwhile, Billy and Jack will make small talk about Chancellor Communications, and Jack will wonder why Billy is so keen on having Amanda Sinclair (Mishael Morgan) on the team there.

Jack will ask if Billy is planning on doing anything requiring a lawyer’s expertise, and Billy will resist, but he’ll finally tell Jack that he’s planning a big story involving the Newmans and justice. Jack will think it’s a horrible idea and he’ll urge Billy not to do it.

After Jack leaves, Victoria will talk with Billy, and she’ll say that she heard about Alyssa being back in town. Billy will share that he’s gunning to get Alyssa on board at Chancellor Communications.

Victoria will think that Alyssa will be a strong ally, and that there may be some blowback at Newman Enterprises, but that If she handles it well, it will prove that the company is in the right hands. Billy will be glad that Victoria didn’t give Victor a pass.

At Society, Theo Vanderway (Tyler Johnson) will be surprised to see Lola Rosales (Sasha Calle) there, since Lola previously said she was going home to crash.

Theo and Lola will talk about their miscommunication, and things will be going well until Theo describes their relationship as “transactional.” Lola will trick Theo into agreeing that part of the reason why he wants her is because she’s Kyle’s ex. Theo won’t really mean it, but Lola will be outraged.

Theo will follow Lola into the kitchen where he’ll say that he was kidding when he reacted in the way that he did. But in the end, Theo will admit that he wasn’t altogether kidding, and Lola will lash out, saying that she thought she meant more to Theo than as a way to get back at Kyle.

Lola will tell Theo that she’s busy and that he should go, and Theo will leave frustrated.

It sounds like a lot of Y&R drama is heating up for Monday’s episode, so stay tuned! Stick with the CBS soap and don’t forget to keep CDL bookmarked for the latest Young and the Restless spoilers, updates, and news.

Next week on #YR, Rey and Sharon’s relationship is on the rocks, Abby discusses her concerns with Chelsea, and Amanda’s DNA test results are in! pic.twitter.com/R0IXCnD3lO