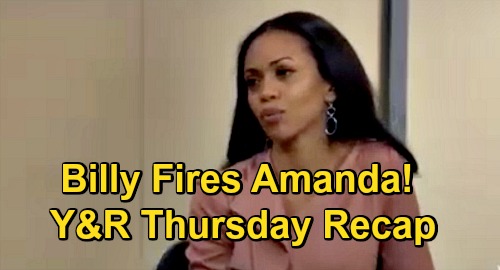 The Young and the Restless spoilers recap for Thursday, December 10, tease that Lily Winters (Christel Khalil) will find Victor Newman (Eric Braeden) at the bar at Society, and she’ll take the opportunity to needle Victor about whether he’s the one who’s framing Billy Abbott (Jason Thompson) for the shooting.

Victor will bluster that the evidence all points to Billy, and if the law can’t prove it, then he will.

Over in the lounge area, Sally Spectra (Courtney Hope) will turn Theo Vanderway (Tyler Johnson) down when he asks her to get more intel about the Abbotts legal strategy in the lawsuit.

Sally will say that her spying days are over, and that she doesn’t need Theo to help her get under Summer Newman’s (Hunter King) skin anymore. Theo will warn Sally that Summer can be a handful, and he’ll wish Sally luck.

At Adam Newman’s (Mark Grossman) penthouse, he and Chelsea Lawson (Melissa Claire Egan) will be nervous about her upcoming appointment with the specialist. Chelsea will be worried about the prospect of Connor Newman (Judah Mackey) losing his mom, and Adam will reassure her.

Victor will stop by, but Adam and Chelsea will have to run to their appointment.

Later, Adam and Chelsea will return form the doctor’s appointment feeling a little less worried, and they’ll have been told that they need to wait until after the holidays to treat the aneurysm.

Adam will say that they’ll spend the holidays with Connor, then they’ll leave Genoa City for good. Adam will assure Chelsea that he’s ready and willing to walk away from his family.

In an interview room at the courthouse, Billy and Amanda Sinclair (Mishael Morgan) will meet with Michael Baldwin (Christian LeBlanc), who will promptly offer a plea deal for attempted 2nd degree intentional homicide.

Amanda will say that Billy’s not guilty, and Michael will lay out all the evidence against Billy, including his strong motive.

Billy will argue back at Michael, despite Amanda having told Billy to remain quiet. “Look me in the eye and tell me that you think I did it,” Billy will say. Michael won’t be able to do it, but he’ll say that the plea deal is on the table until 5pm.

At the Chancellor mansion, Abby Chancellor (Melissa Ordway) and Chance Chancellor (Justin Gaston) will arrive to find Chloe Mitchell (Elizabeth Hendrickson) trying to soothe a crying Miles Fisher as he wails at the top of his lungs.

Chloe will say that she and Kevin Fisher (Greg Rikaart) won’t be there much longer, as they’ve just closed on a house.

After some talk about the honeymoon, Chloe will go to meet Kevin and she’ll leave Miles with Abby and Chance. Abby and Chance will have quite a time, with Abby getting spit up on, Chance changing a diaper, and both of them having a struggle to soothe the baby.

Finally, Miles will be happy and in Abby’s arms, and Chance and Abby will gush about how they’ll soon have their own family.

At Crimson Lights, Summer and Mariah Copeland (Camryn Grimes) will be discussing business, and Mariah will ask what’s going on with Summer and Kyle Abbott (Michael Mealor).

Summer will say that they’re working things out and nothing will get in their way again. As Summer’s leaving, she’ll spot Theo on the patio and she’ll stop to needle him about the lawsuit.

Summer will end up inadvertently spurring Theo on to fight harder in the lawsuit as she brings up how Abby sued Victor over her trust fund.

Theo will find that interesting, and he’ll think that Ashley Abbott (Eileen Davidson) has no right to be furious with him when sweet little Abby sued Victor over money that he was already giving her. Summer will realize too late what she’s done.

At Jabot, Sally will chat with Jack Abbott (Peter Bergman) about some of her ambitions, and she’ll be sure to mention her conversation with Theo earlier and how Theo was complaining about the Abbotts’ settlement offer.

Jack will take off, and Kyle will walk in and learn a bit about how Sally had pretended to be Theo’s friend. Kyle will be amused that Sally is admitting this.

Kyle will think that Theo and Sally are more similar than he first thought, and it won’t be long before Sally is pushing herself as a candidate for Summer’s old marketing position at Jabot.

Kyle will say that the position is filled, and suddenly Mariah will walk in and meet Sally. Sally will leave unhappily, thwarted once again.

Back at Society, Amanda and Billy will arrive to discuss Michael’s plea deal. Amanda will start in by presenting the deal to Billy as an option, but Billy will insist that he won’t plead guilty to something he didn’t do.

Amanda will try to get Billy to see the reality of his situation, and Billy will get miffed and fire Amanda on the spot. Amanda will leave.

Later, Lily will appear to talk with Billy, saying that Amanda called and told her what happened. Billy will say that he needs a lawyer who believes in him, and Lily will tell Billy that she believes in him with her whole heart.

Billy will reveal that he found out where the surprise witness is staying, and that they should talk to him or her immediately. Lily will agree.

Back at Crimson Lights, Jack and Lauren will catch up and they’ll be talking about Sally’s big ambitions when Michael walks up. Michael will tell Jack that he doesn’t enjoy prosecuting Billy.

“Then drop the charges,” Jack will say curtly before leaving. Afterwards, Michael will tell Lauren that the case is going to trial and that he can’t let his personal feelings enter into it.

Thursday’s episode of Y&R sounds terrific, so don’t miss it! Stick with the CBS soap and don’t forget to check CDL regularly for the latest Young and the Restless spoilers, updates, and news. We’ve got you covered!