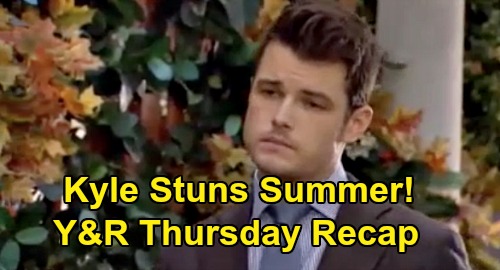 The Young and the Restless spoilers recap for Thursday, October 22, tease that Michael Baldwin (Christian LeBlanc) and Kevin Fisher (Greg Rikaart) will be at the Chancellor mansion contemplating what kind of trouble their mom Gloria Abbott (Judith Chapman) might be in when Gloria walks in the room.

Gloria will get miffed when Michael and Kevin start to interrogate her, and she’ll say she’s going to Chancellor Park with Chloe Mitchell (Elizabeth Hendrickson) and little Miles Fisher.

Meanwhile, in Chancellor Park, Jack Abbott (Peter Bergman) and Lauren Baldwin (Tracey Bregman) will discuss how the “teardrop of love” necklace brought Dina Mergeron (Marla Adams) back to Jack and his family right before she died.

Lauren and Jack will ultimately decide that the necklace isn’t really cursed or magic – but that the power of it lies in the heart.

At Jabot, Kyle Abbott (Michael Mealor) will walk in to find Summer Newman (Hunter King) there. Summer will immediately blast Kyle for really wanting Lola Rosales (Sasha Calle) and for running right back to her.

Kyle will quickly realize that Summer has been following him, and he’ll reveal to Summer that Lola was only consoling him because Dina died. Summer will be sorry.

Nevertheless, Summer will remain peeved at Kyle, and after Kyle gets a call from Jack asking him to come to the Abbott mansion, Summer will say that they’re done here, and that she needs to go. Kyle will remain confused about everything.

Back in Chancellor Park, Gloria, Chloe, and Miles will be hanging out when Jack comes along and says hello to the baby. Jack will then notice Gloria, and he and Gloria will banter while she claims that she got a job in Hollywood with a film producer.

Something about it will just seem off to Chloe, and she’ll confront Gloria, who will innocently claim that she’s back in Genoa City because she’s lonely and wanted love and support.

At Devon Hamilton’s (Bryton James) penthouse, Elena Dawson (Brytni Sarpy) will be leaving with her suitcase when Devon walks in.

Elena will cry and profess her love, but Devon will tell her that she should leave her keys on the table, which Elena will do. As Elena goes, Devon will sit alone in the hallway, upset.

Meanwhile, at Crimson Lights, Nate Hastings (Sean Dominic) will be brooding with his bandaged hand when Amanda Sinclair (Mishael Morgan) shows up. Nate will brace for Amanda to let him have it, but Amanda will say that she’s in no position to judge, and she’ll ask about Nate’s hand.

Later, Devon will show up and tell Nate that he hopes Nate can still be a surgeon.

Devon will tell Nate that Elena has moved out of the penthouse, and Nate will try to explain that Elena felt threatened by what was happening between Devon and Amanda.

Devon won’t want to hear it, and he’ll end up going back to his penthouse, where Lily Winters (Christel Khalil) will visit. Lily will want Devon to deal with what’s happened, and Devon will say that he’s going to focus on his work and the good he’s doing in the world.

Later, Amanda will come to the penthouse to check on Devon, and he’ll invite her to go to New York, where he’s going to meet with an artist that he wants to sign to LP.

Over at the New Hope Clinic, Nate will show up wanting to talk to Elena, but Elena won’t be into having a conversation. Nate will gently force the issue, and he’ll say that he hates it that Elena looks at him with regret and shame.

Nate will tell Elena that he wanted things to happen between them, and that he still wants it. Elena will get very upset and try to shut down the conversation, and when Nate won’t drop it, she’ll run out of the room.

At the Abbott mansion, Jack will have the family called together. He’ll say a few words to Traci Abbott (Beth Maitland), Ashley Abbott (Eileen Davidson), Abby Newman (Melissa Ordway), and Kyle, then he’ll show them what he and Lauren decided to do about the “teardrop of love” necklace.

Jack will open a box, revealing several individual pieces of jewelry made with some of the stones of the larger necklace. Jack will want everyone to have a piece of the necklace, and he’ll explain that Lauren is keeping the main stone.

Jack will then notice Kyle brooding in a corner, and he’ll go talk with his son, quickly learning about Summer’s return and her anger with Kyle over Lola. Kyle will think that maybe this is karma for all the horrible things he’s done in the past. Jack will offer comfort.

Back at the Chancellor mansion, Michael and Kevin will decide that maybe Gloria’s really not in trouble, when Gloria, Chloe, and Miles return. Gloria will go lay down for a while, and Chloe will tell Kevin and Michael that they’re right and that Gloria’s definitely in trouble and hiding something.

Back at Crimson Lights, Jack will regroup with Lauren, and she’ll be pleased to hear that the Abbotts loved what they decided to do with the necklace. Jack will share a dream that he had about Dina, and how she said that John Abbott (Jerry Douglas) loved him and was proud of him and the family.

Jack will admit that he has no idea where his life is headed now, but that perhaps the dream was a turning point for him.

Finally, back in Chancellor Park, Summer will reminisce about everything that’s happened recently with Kyle, culminating when she saw Lola and Kyle’s texts in Chicago.

Suddenly, Kyle will show up, saying that he had to find Summer and that he loves her. Kyle will say that he’s going to prove that she can trust him, and that they’ll be together. Summer will look very uneasy.

Thursday’s episode sounds like it’s going to be terrific, so stick with the CBS soap! We’ll keep you up to speed as more Y&R news comes in. Don’t forget to check back with CDL frequently for all the latest Young and the Restless spoilers, updates, and news.