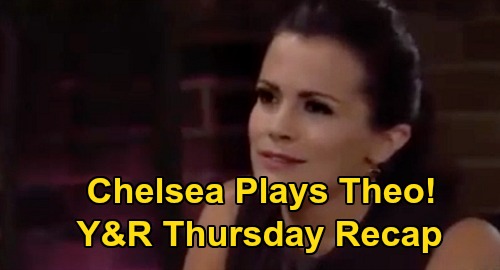 The Young and the Restless spoilers recap for Thursday, September 17, tease that Adam Newman (Mark Grossman) and Chelsea Lawson (Melissa Claire Egan) will decide to go after Billy Abbott (Jason Thompson) first in their plan of attack. As they talk at their penthouse, Chelsea will say that she’s got a plan, and Adam will say that he trusts Chelsea completely.

Elena will say that’s not necessary, and Amanda Sinclair (Mishael Morgan) will gush on about what it feels like to be standing in her sister’s home. Elena will notice what it’s all doing to Devon, and she’ll ask Amanda to leave.

Over at Chancellor Communications, Theo Vanderway (Tyler Johnson) will talk with Billy about running some ideas past Amanda. Both Billy and Theo will think that the other is interested in Amanda for a moment, but each will say that he’s not.

Later, Amanda will arrive and talk with Billy, opening up to him about the DNA test results and the earlier scene over at Devon’s place.

Billy will listen, and he’ll let Amanda know that there are plenty of people in town who knew Hilary who could tell her things about her sister. Plus, Billy will say that he’s got an investigative reported that he could put to the task. Amanda will be touched, but she’ll be a little uncomfortable about not keeping their relationship strictly professional. Billy will say that he’d do this for any of his friends.

Meanwhile, back at Devon’s penthouse, he and Elena will sit down for a talk. Devon will explain that what Elena heard earlier was out of context, but Elena will say that it’s how Devon really feels about Hilary, and that it’s something that they’ve been dancing around since they got together.

Elena will put her foot down, saying that Devon gave Amanda what she asked for, and that it’s enough.

Elena will go on, saying that Devon is her main concern, and that she can see what all of this is doing to him. Elena will urge Devon not to feel obligated to Amanda, and that Amanda can find her answers on her own.

Devon will agree, saying that his involvement in this will end. As Devon and Elena hug, Devon’s phone will buzz, and it will be Amanda calling.

At Crimson Lights, Mariah Copeland (Camryn Grimes) will talk with Lola Rosales (Sasha Calle). Lola will ask how Mariah is doing with Sharon Newman’s (Sharon Case) cancer, and Mariah will ask about how things are going between Lola and Theo.

Lola will tell Mariah about her miscommunications with Theo, and Mariah will think that Lola should listen to what her gut is telling her about Theo. Lola will say that her gut really likes the guy.

At Society, Theo will be approached by Chelsea at the bar, and she’ll make small talk with him, then she’ll ask him if he’d be interested in being the social media liaison for her new fashion line.

Mariah will show up for takeout shortly thereafter, and Lola will tell her about Theo leaving with and flirting with Chelsea. Mariah will think that’s odd, and Lola will say that she doesn’t know how much longer she can put up with this.

At the no-tell motel, Adam will be packing when Chance Chancellor (Donny Boaz) arrives to talk with Adam about their mutual Vegas problem. Adam will say that it’s all being handled, and Chance will press for details, but Adam won’t provide information.

After considerable back and forth on the topic of Vegas, Chance will say that he doesn’t want Adam crossing any lines.

Adam will say that it’s too late for that, and Chance will disclose that he’s considering joining the GCPD and that he doesn’t want Vegas jeopardizing that. “Whatever’s left of this friendship will take a backseat to the law,” Chance will warn. Adam will say that goes both ways, and he’ll leave abruptly, with Chance frustrated.

Back at Chancellor Communications, Theo and Chelsea will arrive, and while Theo is getting Chelsea some water, she’ll plant a listening device on a lamp. Suddenly, Billy will walk in asking what’s going on.

It sounds like a lot of Y&R drama is heating up for Thursday’s episode, so stay tuned! We’ll give you updates as Y&R news comes in. Remember to keep CDL bookmarked so you don’t miss any of the latest Young and the Restless spoilers, updates, and news.