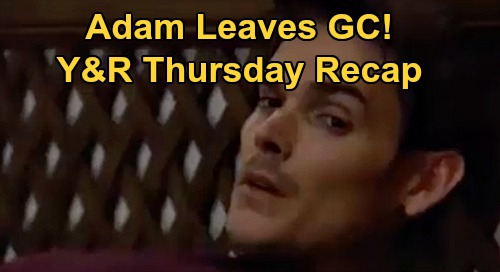 The Young and the Restless spoilers recap for Thursday, September 3, tease that Billy Abbott (Jason Thompson) and Lily Winters (Christel Khalil) will chat at Chancellor Communications.

Lily will note that Billy seems lighter lately, and she’ll think that it’s due to Amanda Sinclair (Mishael Morgan). Lily will press Billy about the attraction she notices between him and Amanda, but Billy will say that he and Amanda previously agreed not to be anything other than friends.

Devon will say that he wants to think about it, and Amanda will take off. Later, Devon will sit at the bar and look at a wedding photo of himself and Hilary.

Back at Chancellor Communications, Billy will catch Amanda swabbing her cheek, and he’ll wonder what’s going on. Amanda will explain about the possible DNA test, and Billy will wonder why she decided to do this now, and if it’s the right move for her.

Billy will insinuate that Nate is pushing Amanda into this, and Amanda will get irritated and tell Billy that he doesn’t get to weigh in on her relationships.

Amanda will then insinuate that Billy is threatened by Nate, which is why he’s lecturing her to back away from the DNA testing process. Billy will ask where all this is coming from, and Amanda will fume that they agreed they weren’t going to act on “whatever this is” between them. Billy will look stunned.

At the Newman Ranch, Chelsea Lawson (Melissa Claire Egan) will call Adam Newman (Mark Grossman) to say that she and Connor Newman (Judah Mackey) are headed home. Adam will say that he’ll be gone when they get back, and Chelsea will flip out.

Victor Newman (Eric Braeden) will walk in the room and overhear Chelsea tell Adam not to leave. Adam will disconnect the call, leaving Chelsea frustrated.

A short while later, Nikki Newman (Melody Thomas Scott) will come home for lunch with Victor. Nikki will soon learn that Victor’s worried about Adam, and Nikki will say that they should refocus their energy on Connor, especially if Adam’s going to run off again.

Soon, Chelsea will return, upset because Adam was gone from the penthouse and took a suitcase with him.

Chelsea will blast Victor for causing all of this by telling Adam that he killed AJ Montalvo. Victor will fire back that Adam is the one who brought all this up. Chelsea will keep blaming Victor, and Nikki will get involved in the argument, but Chelsea won’t back down.

Nikki will tell Chelsea to stop, and that she’s just looking for a scapegoat for her problems.

Nikki will point out that Chelsea could have stopped Adam from blackmailing his father, but she thought it was more important being married to the CEO of Newman Enterprises.

At Sharon’s house, Adam will knock and Noah Newman (Robert Adamson) will answer. Noah will be immediately irritated to see Adam, and he’ll tell Adam in no uncertain terms that Sharon is tired and preoccupied, and that she shouldn’t be focusing on him.

Noah will think that Adam has enough on his conscience to make a woman with cancer help him.

Sharon will come in and interrupt Noah’s tirade, and she’ll ask for a moment alone with Adam. After Noah takes off, Adam will explain to Sharon that he’s leaving to protect Connor and spare Chelsea from having to take care of him.

Sharon will think that this is a mistake, but Adam will be determined. Sharon will ask where Adam’s going, and Adam will tell her under the condition that she not tell anyone where he is. Sharon will agree.

After Adam texts Sharon his soon-to-be location, Noah will return, and Sharon will take a call while Noah sees Adam out. After a few more words blasting Adam for being self-absorbed and burdening Sharon, Noah will tell Adam not to show up again. Adam will say that he won’t.

Later, Sharon will wake up from a nap and talk with Noah. Noah will confront his mother about how she’s pushing herself to the limits. Sharon will insist that talking with Adam won’t hurt her, but Noah will press back, saying that therapy sessions with one’s ex aren’t “conversations.”

Noah will tell Sharon to think about her family, and he’ll say that Adam can do without her, but her family can’t.

Finally, at some cheap motel, Adam will enter and throw his overnight bag down. After looking at himself in the mirror briefly, Adam will lay on the bed alone.

Thursday’s episode of Y&R will be can’t-miss, so be sure to tune in! We’ll keep you up to speed on all the latest soap spoilers, news, and recaps, so stick with CDL going forward.