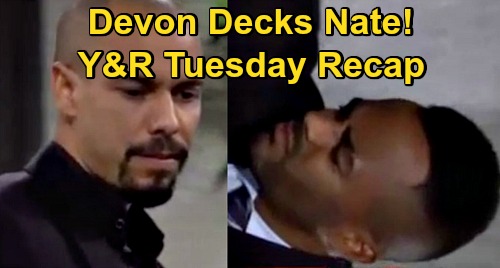 The Young and the Restless spoilers recap for Tuesday, October 20, tease that Nate Hastings (Sean Dominic) and Amanda Sinclair (Mishael Morgan) will have an awkward conversation at Crimson Lights ahead of the gala for Devon Hamilton (Bryton James).

Both Nate and Amanda will be uncomfortable due to their recent breakup, but nevertheless they’ll say that they’ll see each other at the gala.

Meanwhile, Lily Winters (Christel Khalil) and Billy Abbott (Jason Thompson) will speak briefly at Chancellor Communications. Billy will wish Lily luck at the gala, while he heads off to the Abbott mansion to see Jack Abbott (Peter Bergman).

Over at the Grand Phoenix, Nick Newman (Joshua Morrow) will gush to Phyllis Summers (Michelle Stafford) about how great the hotel looks for the gala. And up in Elena Dawson (Brytni Sarpy) and Devon’s suite, they’ll prepare for the gala.

Later, Devon and Elena will appear in the lobby, and Elena will step away while Devon asks Nate about his breakup with Amanda. Nate won’t want to talk about it tonight.

Nate will also talk with Elena briefly, telling her that she looks amazing. Nick and Devon will chat as well, and Nick will offhandedly mention that he ran into Nate and Elena at the clinic the other night when a kid almost died. That will interest Devon.

Up in Amanda’s suite, Lily will show up to see if Amanda’s coming to the gala. After advising Amanda on which shoes to wear, Lily will learn that Nate broke up with Amanda.

A short while later, everyone will convene in the ballroom and Nate will thank various people in his acceptance speech, including Nate and Elena, which will make them both uncomfortable.

After the ceremony, Phyllis will learn from Amanda that she and Nate broke up, while Lily and Nate talk briefly about how Neil Winters (Kristoff St. John) would be proud of Devon.

Elsewhere, Devon will ask Elena about the teenager who overdosed, and he’ll press her for details on why she didn’t share that with him. Elena will squirm and tell Devon that the kid was Jared (Michael Maclane), and that she didn’t tell Devon because she didn’t want to worry him.

Devon won’t understand, and Elena will break down, saying that she can’t do this anymore. Elena will run off, and Nate will approach Devon. Devon will ask why he didn’t disclose that Jared almost died at the clinic. Nate will want to go check on Elena, but Devon will say that he’ll go check on her.

Nate will head to the bar, where he’ll encounter Amanda. “Nights like this must be hard for you seeing them together,” Amanda will say. “But maybe not seeing Elena at all would be harder.” Nate will ask what Amanda’s getting at, and Amanda will say, “Don’t worry, I won’t tell Devon.”

Up in their suite, Devon will enter to find Elena crying on the couch. Devon will gently press Elena for information on what might have happened to Jared, and he’ll ask if Elena made a mistake that night. Elena will be sobbing, saying that it’s all her fault and that she was so stressed out. “We were coming down from an adrenaline rush. We momentarily lost control,” Elena will sob.

Devon will promptly make his way down to the lobby, where he’ll blow by Phyllis and totally punch Nate. Nate will be down for the count, and Elena will show up in the lobby, horrified.

At the Chancellor Mansion, Chloe Mitchell (Elizabeth Hendrickson) and Kevin Fisher (Greg Rikaart) will be hanging out with little Miles Fisher when Gloria Abbott (Judith Chapman) bursts in the front door.

Kevin will be stunned, and “Grandma Glo” will meet her grandson happily. Kevin will have a lot of questions for Gloria, but she’ll be circumspect and won’t want to be interrogated.

Kevin will be sure that Gloria’s in some sort of trouble, and he’ll call Michael Baldwin (Christian LeBlanc) for backup. Kevin will continue with his interrogation of Gloria, but she’ll skirt every question and tell Kevin that it breaks her heart that she gets all this suspicion.

After everyone goes to bed, Gloria will sneak around the living room, and she’ll reach in a vase and appear to take something out of it.

At the Abbott mansion, Jack will reminisce about Dina Mergeron (Marla Adams), remembering a time that he blasted his mother for leaving the family when he needed her. Billy will show up and cajole Jack into having a couple drinks and talking about Dina.

After a good conversation with his brother, Jack will thank Billy for getting him to open up. Jack will mention the “teardrop of love” necklace, and they’ll mention their equally nonexistent love lives.

Lily and Billy will joke about Billy not really being a cynic like he pretends to be, and they’ll share a nice moment together.

Tuesday’s episode of Y&R is going to be riveting, so stick with the CBS soap! We’ll keep you up to speed on the latest Young and the Restless spoilers, updates, and news. Here at CDL, we’ve got you covered!