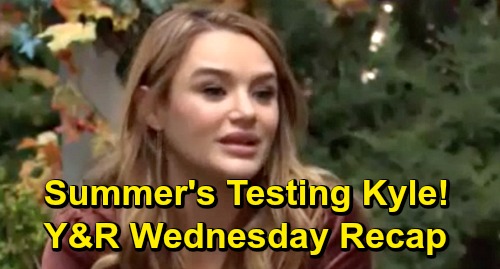 The Young and the Restless spoilers recap for Wednesday, October 14, tease that Sharon Newman (Sharon Case) will excitedly ask Mariah Copeland (Camryn Grimes) and Faith Newman (Alyvia Alyn Lind) to help her with wedding plans. Mariah will be into it, but Faith won’t be enthused, as she’ll still be worried about getting the results of Sharon’ surgery.

Lily will tell Billy to hang up the phone, and she’ll eventually convince him to abandon plans for a part two to the exposé. Lily will tell Billy that he won, and that he should try to have some compassion for Adam. Billy won’t be there yet, but he’ll appreciate Lily’s concern for his well-being.

Rey will be exasperated with Kyle. Meanwhile, at Jabot, Kyle will learn that Summer texted Jack Abbott (Peter Bergman) asking for a leave of absence while she’s out of town for a while. Kyle will leave distressed.

At Crimson Lights, Nick Newman (Joshua Morrow) will learn from Rey about his engagement to Sharon. Rey will ask Nick to be his best man, and Rey will think that’s humorous, but he’ll agree happily. As Nick and Rey are discussing the wedding, Adam will appear and overhear, then he’ll leave quickly, clearly upset.

On the patio, Kyle will encounter Theo Vanderway (Tyler Johnson), who will needle him about his broken engagement to Summer. Lola will arrive and shoo Theo away, then Lola will learn about Summer’s runaway bride routine.

Lola will blast Kyle for showing up at Society last night, and she’ll tell Kyle in no uncertain terms that the kitchen is closed to him. Lola will leave in a huff.

Once Lola’s gone, Kyle will call someone named Jen in New York, saying that she’s been on his mind lately, and that he might be heading to New York soon. Kyle will tell Jen that seeing her would make his trip a lot more interesting, and he’ll promise to call her.

Over at Adam’s penthouse, he’ll sit alone, moping and burning a picture of Rey and Sharon from the local newspaper. Adam will then call an associate and ask him to put a tail on Rey. “I want to know everywhere he goes, his daily routine, all of it,” Adam will say.

At Devon Hamilton’s (Bryton James) penthouse, Devon will tell Elena Dawson (Brytni Sarrpy) that he’s up for a humanitarian award – business person of the year, and he’ll credit Elena for all her support and love when he was going through his tough time.

Elena will feel terribly guilty as Devon gushes about her, and as he says that he’s going to meet with Amanda Sinclair (Mishael Morgan) later.

In Chancellor Park, Nate Hastings (Sean Dominic) will be out for a run to clear his head, and he’ll be flashing back to sleeping with Elena when Amanda snaps him out of it.

Amanda will think that it’s time for an honest conversation about what’s wrong with him. Nate will promptly break up with Amanda, saying that her being Hilary Hamilton’s (Mishael Morgan) twin bought a lot of unexpected feelings for him. Amanda won’t quite understand, but she’ll accept it and tell Nate goodbye.

At the New Hope Clinic, Nate and Elena will be miserable as they try to work together. Elena will share that Devon is getting a humanitarian award, but all she could feel was shame and guilt.

Nate will want to talk further with Elena, but she’ll walk away, and Nate will gaze after her, as Amanda looks in from outside the clinic. Later, Nate will want to approach Elena again for a conversation, but he won’t know what to say.

At the Grand Phoenix, Devon will bump into Mariah, who will be checking out the spa services for Sharon’s pre-wedding festivities. Mariah will wonder how everyone on Devon’s end is doing with Amanda being Hilary’s twin.

Devon will say that something seems to be going on with Nate, and that he hopes Amanda isn’t setting herself up for disappointment.

A short time later, Devon will meet with Amanda, and they’ll discuss Amanda’s decision to hire a private investigator to look into her past. Amanda will share that Nate broke up with her, and Devon will state that something is going on with Nate lately.

Amanda will say that she’s no longer a part of it, and Devon will muse that he thought Nate and Amanda were good together.

Back in Chancellor Park, Faith will bump into Summer, and she’ll be confused, since Summer is supposed to be off getting married.

Summer will try to explain, and she’ll say that she had concerns and decided to take a step back, but that she doesn’t want Kyle to know that she’s back. Faith will understand that Summer wants to check up on Kyle. Soon, Faith will get a text from someone and leave.

Finally, back at Sharon’s place, Sharon will be alone when the phone rings. It will be the doctor’s office with her surgery results. Rey will walk in, and Sharon will be sitting alone crying.

Rey will immediately assume that the news was bad, but Sharon will say that her margins were clear, and that she is on the way to being cancer free.

It sounds like Wednesday’s episode is going to be fantastic – you won’t want to miss it! Stick with the CBS soap and don’t forget to check back with us frequently for the latest Young and the Restless spoilers, updates, and news. Here at CDL, we’ve got you covered!