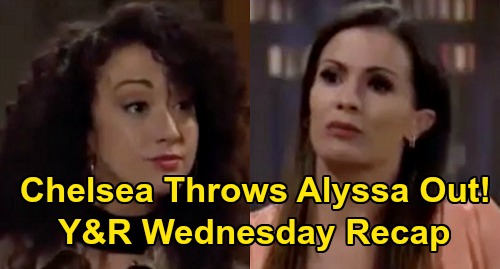 The Young and the Restless spoilers recap for Wednesday, September 9, tease that Sharon Newman (Sharon Case) and Rey Rosales (Jordi Vilasuso) will talk at Sharon’s house about Sharon’s pathology report showing that her cancer had spread.

Sharon will lament that she feels like she’s let everyone down, and she’ll say that she never imagined that the cancer would have spread to her lymph nodes.

Sharon will have difficulty processing the news, and she’ll think that she just can’t do this, but Rey will tell her that she can, and that he has enough faith in her for them both.

Rey will wonder if Sharon needs to eat, and Sharon will go off about how she’s tired of everything being about her cancer and taking care of herself. Sharon will feel like she’s put in so much effort, and then the treatment didn’t work.

Sharon will say that “reconstructive surgery” is one of the terms that she heard in the doctor’s office, and that it’s something she’ll have to face. Rey will suggest that they take things one step at a time, and that Sharon doesn’t need to worry about him. Rey will stress that together, they’d get Sharon healthy again.

At Society, Nick Newman (Joshua Morrow) and Summer Newman (Hunter King) will be waiting to meet Phyllis Summers (Michelle Stafford) for dinner. Phyllis will be fashionably late, after being on the phone with someone in her Grand Phoenix suite about having all her ducks in a row.

Soon, Phyllis will arrive at Society, and she’ll promptly tell Abby Newman (Melissa Ordway) that she raised enough funds to buy her out at the Grand Phoenix.

Abby will assume that Phyllis borrowed the money from Nick, but Phyllis will say that she raised it herself. Abby will be stunned. Phyllis will then join Summer and Nick, and she’ll immediately ask about Sharon and her pathology report. Nick will say that he hasn’t heard anything yet.

Later, Summer will be off on the phone with Kyle Abbott (Michael Mealor) as Phyllis tells Nick about buying Abby out of the Grand Phoenix. Phyllis will gush about no longer having a silent partner breathing down her neck. Nick will then get a text from Rey and his face will fall.

Back over at Sharon’s house, Rey will tell Sharon that he sent a text to Nick and others saying that the news from the doctor was a mixed bag, and that Sharon was going to take the night to rest.

Rey will say that he didn’t want Sharon to have to repeat the same news to everyone, and that he wanted to give her time to let everything sink in.

Back at Society, Nick will tell Phyllis about Rey’s text, and that Rey doesn’t want everyone rushing over to Sharon’s place. Nick will surmise that it’s bad news, and Phyllis will hope that Nick’s wrong.

Nick will take off to go be with Faith Newman (Alyvia Alyn Lind), and Summer will return to the table to hear the unpleasant news about Sharon.

Back at Sharon’s place, Sharon will eat something, which will immediately make her feel a bit better. While Rey goes to the kitchen to get some of Faith’s cherry crumble, Sharon will text Adam Newman (Mark Grossman) a message saying that she’s sorry how they left things, and that she won’t abandon him.

At Chancellor Communications, Lily Winters (Christel Khalil) will return tired from her conference. Billy Abbott (Jason Thompson) will ask how it went, and Lily will say that she talked with some great women at the conference.

Lily will stress that she wants to put together a diverse team at Chancellor Communications, and Billy will think that they’re a good example of that diversity.

Lily will say that it’s time for a talk, and she’ll stress that they need to do better and work harder to go find people with diverse voices. Lily will suggest finding people on different paths – people who deserve a wider audience.

Billy will say that he gets it, and that he knows he has a lot to learn. Billy will note that he understands his privilege and that he saw it firsthand after Hurricane Katrina.

Lily and Billy will decide that together, they’ll get Chancellor Communications there.

At Adam and Chelsea Lawson’s (Melissa Claire Egan) penthouse, Alyssa Montalvo (Maria DiDomenico) will arrive to see Adam. Chelsea will lie and say that Adam’s out of town on a business trip.

Chelsea will reference the fact that Adam’s still not himself after finding out that Victor Newman (Eric Braeden) killed Alyssa’s father, and she will say that she’s glad that Alyssa decided to leave the past in the past.

Alyssa will say that Adam used her grief and her shame to manipulate her to get what he wanted.

Chelsea will point out that Adam doesn’t work at Newman anymore, and Alyssa will say that she knows the whole story – that Adam killed her father, and that soon everyone would know the story.

Chelsea will then reveal that she doesn’t know where Adam is, and that he left. Chelsea will bring up Connor Newman (Judah Mackey) and try to guilt Alyssa into not getting back at Adam for Connor’s sake. Alyssa won’t fall for the Connor card.

Then, Chelsea will say that Alyssa signed a nondisclosure agreement, but Alyssa won’t be threatened by that at all. Alyssa will go to leave, and Chance Chancellor (Donny Boaz) will walk up to the open door.

Alyssa will say that Chance and Chelsea have obviously been talking, so Chelsea must know that she’s investigating what happened in Las Vegas. “Adam’s crimes will be exposed,” Alyssa will promise.

Chelsea will tell Alyssa to get out, and Chance will enter the penthouse. “What was that about? Why were you arguing, and how much does she know about what Adam’s going through?” Chance will ask. Chelsea will tell Chance to leave it alone, and she’ll ask if Chance found Adam.

It sounds like a lot of Y&R drama is heating up for Wednesday’s episode. You won’t want to miss it! We’ll be sure to keep you current with all the latest Young and the Restless spoilers, updates, and news. Here at CDL, we’ve got you covered!