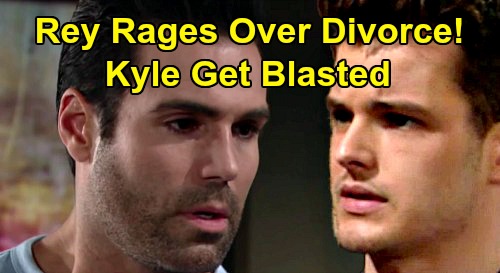 The Young and the Restless (Y&R) spoilers tease that Kyle Abbott (Michael Mealor) will soon face consequences for breaking Lola Abbott’s (Sasha Calle) heart. Y&R viewers know Rey Rosales (Jordi Vilasuso) isn’t just a protective brother. He’s served as a father figure throughout Lola’s life, so she means more to him than just about anything in the world.

Thanks to Sharon Newman’s (Sharon Case) crisis, Rey is feeling even more protective of his loved ones than usual. Lola’s heartache will just be one more thing that Rey can’t control. He’ll hate to see someone else he cares about in pain.

All of this will bubble up into total rage for Rey, which means bad news for Kyle! He’s about to face the wrath of Lola’s big bro.

The Young and the Restless spoilers say Rey will be crushed when he gets updates on Kyle and Lola’s divorce decision. He wanted to believe they’d found lasting happiness and that Kyle wouldn’t hurt Lola.

However, Rey may not be too surprised that Kyle ultimately drifted back in Summer Newman’s (Hunter King) direction. He’ll be furious that his sister’s the one who’s now paying the price.

To be fair, Lola has feelings for Theo Vanderway (Tyler Johnson) as well – feelings she never let herself accept or explore due to her marriage. That’ll change now that Lola’s ending things with Kyle, but the point is neither Kyle nor Lola’s heart was fully in this anymore.

Y&R fans have watched their marriage slowly crumble, even if Rey couldn’t see it on the outside looking in.

Nevertheless, Rey will take Lola’s side, which is reasonable under the circumstances. That’s what a lot of people do when a divorce gets underway; they take sides and usually support the person they care about most. In Rey’s case, that’s obviously Lola.

The Young and the Restless spoilers say Rey will corner Kyle and rip into him over Lola’s sorrow. He’ll grill Kyle about exactly how this went wrong and chew him out for daring to hurt his little sis.

Kyle won’t know about Sharon’s breast cancer, but that’ll undoubtedly be a factor in all this for Rey. He may snap that Kyle should’ve appreciated Lola and their life together since time is so precious.

Rey will view Kyle as selfish, but he may eventually determine that it’s best for Lola to know the kind of man he is now. At least Lola didn’t devote years of her life to a marriage that wasn’t going to last.

Rey will be disappointed and livid, but there won’t be much Kyle can do other than stand there and take it. He can try to defend himself a bit, but it’s safe to say Rey won’t be interested in hearing his excuses.