The Young and the Restless Spoilers: Ripley Terror Unleashed, Amanda Finds Him Sitting on Her Bed – New Details on Abusive Ex’s Arrival 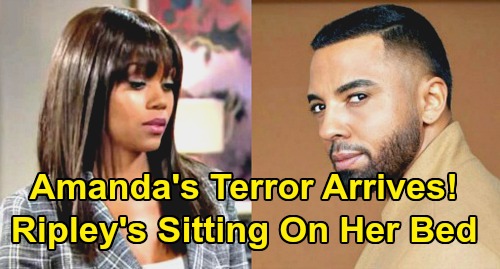 The Young and the Restless (Y&R) spoilers tease that we’ve got some new details about Ripley Turner’s (Christian Keyes) imminent arrival. Y&R fans know Ripley is Amanda Sinclair’s (Mishael Morgan) abusive ex-fiancé. He was so ruthless and controlling that Amanda had to get a restraining order – and Ripley got one in return.

Amanda even had someone put a tracker on Ripley so she’d know where he was at all times. It’s part of the reason starting over fresh in Genoa City appealed to Amanda. However, Amanda will lose the signal and have no clue where Ripley is…until he shows up in her hotel suite.

It’ll be quite a shock for Amanda when she enters her room and finds Ripley sitting at the foot of her bed.

Amanda would’ve rather avoided this reunion indefinitely. Ripley shook Amanda’s faith in love and other human beings in general. She trusted Ripley, but he shattered that trust and made it so she can barely live her life. Amanda’s completely closed off to most of the world now, and Ripley’s to blame for that.

However, all Amanda will be able to think about in his moment is her own safety. The Young and the Restless spoilers say Amanda will be frozen with fear over the sight of Ripley.

Since he managed to get inside her suite at the Grand Phoenix, that just goes to show how crafty he can be. Perhaps Ripley will charm someone at the front desk and lie his way right into the room.

Regardless, Amanda will be shaking in her boots and wonder what Ripley wants. Her terror will be obvious from the second she lays eyes on him. Ripley should be as smug as ever, but will Billy arrive in time to save the day?

Billy just so happens to be staying at the Grand Phoenix now, so he’ll be in the prime position to rescue Amanda from danger.

The Young and the Restless spoilers say Billy just might be Amanda’s hero, which could pull them even closer. As for Ripley, he’ll prove he’s a force to be reckoned with! We’ll give you updates as other Y&R news comes in. Stay tuned to the CBS soap and don’t forget to check CDL often for the latest Young and the Restless spoilers, updates and news.